Sunderland’s automotive sector to grow in 2014 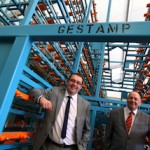 UK – There were a number of major investments made by Nissan, TRW and Gestamp in their Sunderland operations during 2013. Nissan invested £750m in a new model launch programme which will see the Note, Qashqai and electric powered LEAF models being produced in Sunderland. In addition, the Japanese OEM will start production of its premium brand Infiniti Q30 model at the plant in 2015.

Following the success of its bid to the Government’s Regional Growth Fund for £1.75m, TRW announced a £15m investment in its Houghton-le-Spring factory for two new lines to build the next generation of power steering motors.

After winning a major contract with BMW to provide parts for the new MINI series, Sunderland-based car parts manufacturer Gestamp invested £150,000 in a new 1,125 sq. m extension at its Washington plant to store the newly produced MINI parts prior to delivery to BMW’s Oxford plant.

Councillor Paul Watson said: “The achievements of Sunderland’s automotive and supply chain companies last year set the stage for a strong year of productivity and growth in 2014. This sector is key to economic growth in the city, region and UK, and the record-breaking production capabilities of Sunderland-based companies have brought the city major new investment and have positioned us as a global hub for automotive manufacturing.”