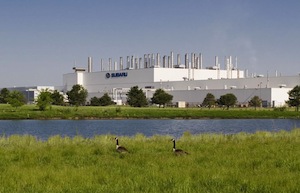 US – Entering production in 2018 at the Indiana plant, the three-row vehicle will be larger than the retired Tribeca it replaces. The addition will bring the OEM’s manufacturing line-up in the country to four models: the Legacy, the Outback, a new Impreza compact sedan and a five-door model beginning production in late 2016.

Subaru said its production in Indiana will total around 228,000 units this year, but that annual capacity will increase to 394,000 with the introduction of the new Impreza. The OEM has reported its seventh successive year of record sales and expects to close 2015 with over 550,000 – three times as many as in 2007.