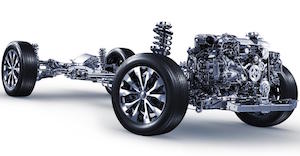 Japan – The brand’s signature engine debuted on the Subaru 1000 compact passenger car in 1966 and the technology has continued to be refined; with the exception of mini vehicles, every Subaru model today is fitted with a Boxer engine. Total production has now exceeded 16m units.

In the horizontally opposed design of the Boxer, the pistons cancel out each other’s inertia, reducing vibration and improving balance to provide smooth acceleration up to the highest speeds. Its compact form also means that it can be installed lower in the engine bay than a conventional four-in-line engine, thus lowering the centre of gravity.

The Boxer comprises a key element of Suburu’s symmetrical all-wheel drive (AWD) system, which is claimed to offer “superior” stability and traction; the symmetrical layout of the drivetrain balances the weight distribution, assisted by the longitudinally mounted engine. According to Subaru, the synergy between the engine and drivetrain “delivers excellent performance, both in terms of high-speed stability and under cornering”. The OEM produced its 15-millionth vehicle equipped with symmetrical AWD earlier this year.