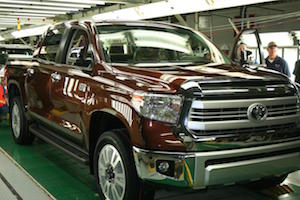 Toyota Motor Manufacturing Texas (TMMTX) had to suspend operations after sustaining damage to the roof and other parts of the plant in San Antonio. Production was halted on May 18 until at least May 20.

No-one was injured but there have been power outages because of water leaks, and damage checks will have to be made throughout the 190,000 sq.m plant to ensure that it is safe. While storms have been battering Texas for weeks, causing widespread damage across the state, factories had escaped the worst until now. Although storms are expected for the time of year, these have been particularly severe.

Just a few weeks ago, a spokesperson for TMMTX said: “We didn’t experience any production issues due to the hail [and] our standard inventory conditions are such that we do not have a large inventory outside. Since TMMTX operates on the just-in-time system, there is not much downtime between when our product rolls off the final line and when it is shipped.”

Toyota announced last year that it would be expanding production at San Antonio. It recently added a regular Saturday production shift, hiring around 200 new workers; the company budgeted $26m to cover the increased labour and to pay for new tools and equipment. The plant, which makes the Tundra full-size and Tacoma mid-size pick-up trucks, is expected to manufacture around 240,000 units this year. When the factory opened in 2006, a truck came off the line every 105 seconds, but more recently this had been reduced to around 60 seconds.