This year’s exhibition, being held between 27-29 November, is according to the organisers stronger than ever, despite the difficult economic climate. The diverse nature of the automation market, and the complex and inter-related nature of drive and control technologies, means that visitors do not attend expecting displays of major game changing innovations. Instead, they are much more likely to come in search of partners and suppliers who can work with them in the upgrading and evolution of facilities.

Addressing practical problemsThe practical orientation of the Nuremberg event is evidenced by the statistics: according to the organisers around three quarters of last year’s visitors cited the need for assistance in dealing with a specific problem as a motivation for their attendance. The accompanying conference seeks to offer an insight into the best available automation technologies and reflect their practical application rather than provide more general scoping of long term technological trends. The conference aims to encourage a dialogue between research, product development and application, with special featured joint stands taking key themes including ‘Wireless in Automation’,’ Open source meets Industry’ and the ’AMA sensors, Measuring and Testing Technologies.’ 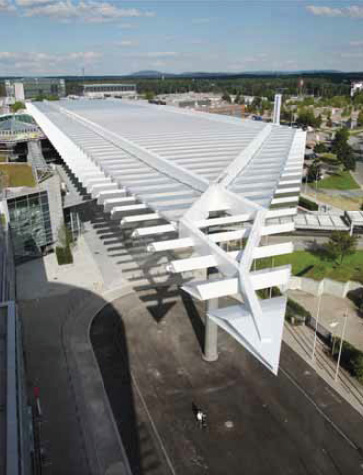 Wide range of specialist exhibitorsThe 2012 event is slated by the organisers as offering products and services from nine sectors ranging from basic drive system hardware, such as motors and drive components, through the familiar electro mechanical components to peripheral equipment including cabling systems and fibre optics. Visitors will see extensive participation by specialist companies in the field of sensor technology, which continues to be critical for innovation and development in automation applications.

Among the large companies attending, ABB is perhaps typical in exhibiting a wide range of products at the event, including many of direct interest to visitors from the automotive sector. ABB specialises in assembly and test systems for engine, transmission and axle lines. The company says its approach to business issues encompasses the use of standard base components and function groups that have common interfaces, allowing its systems to use standard modules in a configurable approach. The ABB product range includes: Robots, conveyor systems, equipment for material handling and machine tending, grinding solutions, test and gauging technology, integrated systems including PC-based control and pre-designed products for powertrain assembly lines.

While increasingly sophisticated image processing and identification and measurement sensor technologies have applications across a broad range of environments, visitors will find much of interest to the automotive sector, as so much of the recent progress in automation and quality assurance has been dependent on the creative adaptation and development of these techniques.

Pepperl and Fuchs GmbH is amongst those offering a range of sensors. Its R2 Series Photoelectric sensors boast an ultra-small footprint, the result of a very small housing with 45° cable outlet for space-saving installation. Designed for severe operating environments, the robust and long lasting scratchproof glass front has no dirt-collecting edges. Alternatively, its F77 Ultrasonic sensor promises reliable detection of transparent objects independent of material. These next generation ultrasonic sensors encompass a miniature design with high interference resistance against compressed air and machine noise as well as a short blind zone for space-restrictive areas. RFID and optical sensors are also on offer.

Accessibility and sophisticationSoftware developments will feature prominently at Nuremburg this year. Information Management Tools and Plant 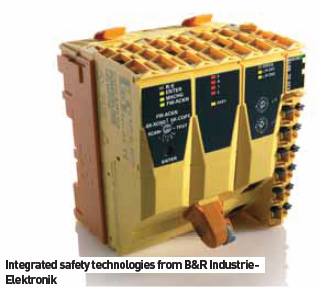 Intelligence Systems play an increasingly important role in modern industry, and visitors are expected to seek out specialists in administrative software, project planning, and engineering simulation tools. Exhibitors at the show will include all the leading software providers, along with numerous specialist concerns. Alongside software, visitors can expect to see the latest in Human-Machine Interface developments. In an environment where increasingly efficient production and assured quality requirements are placing greater responsibility on production operatives, Weintek Labs Inc’s product lines include programmable graphic touch screen operator interfaces, which provide the ideal front end for most of the PLCs used on the factory floor, as well as open-platform based touch screen operator interfaces which can be configured with any Windows CE compatible programming software to satisfy the industry’s demands for next-generation devices.

Aucotec AG presents a solution that uses the advantages of cloud computing and apps for the engineering and maintenance of machines, plants and mobile systems in what it claims is a highly a practicable way. Its software system Engineering Base (EB) enables suppliers and external employees to be integrated from the outside without extended setup times, time consuming consultations or data transfer and adjustment. According to the company, EB’s three-layer architecture provides highly flexible scalability for any size of business from a single workplace to a global enterprise. And only because of this architecture can it be offered and managed in the safe private cloud as “Infrastructure-as-a-Service” (IaaS). At a higher configuration level of the cloud use, data access is extended beyond supplementary in-house applications via apps in mobile devices.

Visitors will notice also the increasing interest in virtualisation, with software suppliers coming to recognise the added functionality it can offer at relatively low cost. Mass-market mobile devices have similarly extended the potential for mobile remote monitoring of production processes. There will be growing evidence at SPS-IPC-Drives 2012 of just how significant an impact the development of low cost tablet computing is likely to have on operator work patterns 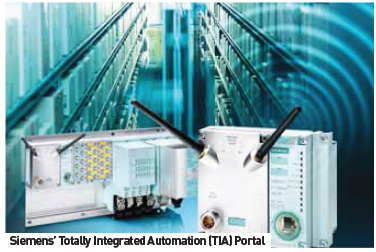 Managing workflow in the automated environmentControl systems - both PLC based and IPC based - are at the heart of new development in industrial automation and are an important core of the 2012 Nuremburg event. Visitors will be able to explore the potential of modular controls for this application, with CNC systems and related communication architectures on offer. For many in the Automotive sector, the interoperability of control systems and the flexibility of differing systems and components are key concerns. Automotive manufacturers and suppliers in Europe and the US operate with plants of varying age and equipment, yet adoption of the newest technologies for these companies cannot be restricted to new-built plants. Visitors will look for ways of adapting existing systems at a time when capital investment may be constrained due to long term economic uncertainty. As a result, gateways allowing the incorporation of newer controllers and sensors into existing systems, together with software conversion programmes, will be of interest as ever. System suppliers have become ever more skilled at addressing these key issue issues, recognising that commercial advantage will go to those best able to offer solutions that can integrate with and add value to existing equipment.

Numerous exhibitors will be offering products addressing the issue of workflow control in automated production environments. Visitors from the automotive manufacturing sector will be familiar with Siemens’ Totally Integrated Automation (TIA) Portal. Siemens claims this proven industrial engineering framework allows customers to optimise all planning and production processes along the entire value chain from a single control display screen. Recent company acquisitions in the field of visualisation software will have further strengthened Siemens’ ability to provide software solutions for complex automated plants. Roth Steuerungstechnik GmbH will showcase its Flowtrol – total workflow control – concept at Nuremburg this year. The company argues that as production facilities become ever more complex, it takes elaborate technical and human process control to keep tabs on every machine. Flowtrol is an app that was developed to simplify this control significantly. Until now, machine operators have had to make their way to a large control unit on-site and reconfigure a machine when its signal light shows a malfunction. Now the Flowtrol app makes it easy to view the status of all production steps and all individual production parts via smart phone. The complex numerical content of all executed processes appears in clear graphics on the smart phone display. If a malfunction is indicated, it can be located quickly, viewed in live video and rectified by means of the app’s teaching feature. With networked communication among all staff, procedures can be optimised quickly and malfunctions can be resolved while saving time and effort. Rockwell Automation is likely to show its latest range of programmable automation controllers in the CompactLogix range. More generally, automotive visitors will be interested in the company’s wide-ranging experience in assisting auto manufacturers and suppliers to develop and upgrade manufacturing processes. Newly released sensor components, offering a range of sensor modes and mounting options, are also expected to be of interest.

For many attending the SPS-IPC-Drives Show this year, issues of drive technology and motors will be uppermost in their minds. Two thirds of industrial energy use can be traced back to electric motors, so even the smallest improvement in efficiency can offer significant economic and environmental benefit. Siemens will display its unified range of Simotic low voltage motors in efficiency classes IE2 and IE3, as well as sophisticated motion control systems under the Simotion brand. Simotion offers a scalable motion control system compatible with both centralised or distribution machine control concepts. Simotion is subject to regular upgrading with recent improvements designed to offer both enhanced ergonomic engineering and faster start up.

Sophisticated industrial communication systemsCommunication protocols are another area undergoing significant change. Recent years have seen automation systems using standard TCP/IP and various industrial network protocols for sensor and peripheral applications, while increasing use of Ethernet based controllers having both TCP/IP and Industrial Ethernet connectivity is allowing communication directly into the core business systems. Evidence of these trends is likely to be apparent to visitors at SPS-IPC- Drives 2012. 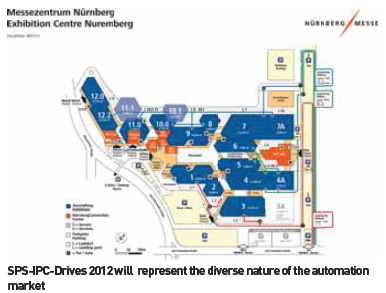 Routers and LAN-to-LAN Routers, Digicluster enables the creation of a flexible connection between plants, machinery and coordination or design offices, as well as between complete networks. The Router is directly connected with the Digicluster via VPN. Identical machines and plants with the same IP addresses could be multiple-linked via NAT 1:1. Lucom, like many system suppliers, is acutely aware that the security of such systems can be an issue for their customers so a strong certificate-based encryption maintains the access rights of remote workers and protects the communication between the systems. An attack from outside or capturing communications on the Internet is impossible. The configuration is safe and easy. It will be generated automatically by creation of a router and is available for downloading at the mediated VPN Site. Phoenix Contact will display its AutoSync technology, which offers the possibility of enhanced automated production reliability and reduction of down time by linking controllers via seamless coordination and data synchronisation.

B&R Industrie-Elektronik GmbH offers control systems and integrated safety technologies to machine makers and those constructing automated production plants. Recent developments include sophisticated condition monitoring techniques to ensure machine reliability, minimise down time, and ensure quality targets are achieved. Remote monitoring is of increasing importance in many industrial environments, and though the potential in automotive related workplaces is less obvious than in some other industrial environments, delegates from the sector will wish to look carefully at the initiatives on display at the Show. In recent months Fieldbus Foundation has developed the Remote Operations Management Concept involving a single integrated infrastructure specifically for process automation.

Quality of experience organisers key objectiveIn a world where communication technologies have been transformed in recent years, the role of the Trade Show is changing. Colleagues use social media and professional forums and networks for that vital contact and interaction which in previous years was such an important feature of the Trade Show. Increasingly organisers have to think creatively to appeal to their exhibitors and attract visitors.

The organisers of SPS-IPC-Drives 2012 articulate a clear philosophy: it is the potential of an event rather than its size which is crucial to them. They wish to create focused business-to-business platforms that will be distinguished by their quality and thus become the key forums for their industry. To do this they seek out niche events, looking for special interest topics which they then develop in conjunction with appropriate representatives from the industry, research, trade media and associations. Visitors to previous years IPC-SPS-Drives have been very appreciative of its clear focus and ability to offer an effective overview of automation. This year’s visitors should be equally well served.