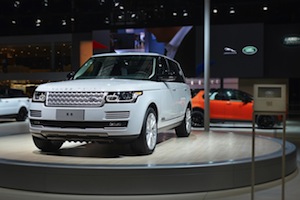 UK – The Range Rover LWB Vogue SE was completed on April 2 at the company’s West Midlands plant, marking the 45th anniversary of Range Rover production. The landmark vehicle is destined for export to China, a growing market for the brand.

Solihull has been producing Land Rover SUVs since 1948 and was recently upgraded, almost doubling its workforce and trebling production. Today it is a centre of excellence for aluminium and lightweight vehicle manufacturing, with the largest aluminium bodyshop in Europe; the biggest single aluminium pressing for any Range Rover weighs just 7kg.

Of the 6m Land Rovers produced to date, more than 900,000 are Range Rovers, the latest model having been introduced in 2012. One-third of the total were made at the company’s UK plants, at Solihull and also Halewood, Liverpool. The current line-up features the Range Rover, Range Rover Sport, Range Rover Evoque, Discovery, Discovery Sport and Defender.