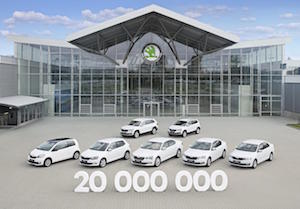 Czech Republic – The OEM’s 20-millionth vehicle, a Karoq, rolled off the assembly line at Kvasiny more than a century after car production began at the main plant, Mladá Boleslav. The new Karoq will be launched in late October.

“Producing 20m cars is a tremendous milestone in our company’s history. We are aiming for another production and sales record this year,” said Skoda’s CEO, Bernhard Maier. “The basis for this is our Strategy 2025, which will sustainably prepare Skoda Auto for the processes of change in society and the automotive industry.”

Under the 2025 Strategy, Skoda will progress the electrification of its model range and offer five pure electric vehicles in various segments by the end of the period. The OEM presented its plan for electrification and autonomous driving, Vision E, at the Frankfurt Motor Show in September.

Skoda currently manufactures vehicles at 15 locations in eight countries. The OEM has expanded its production capacity significantly in recent years, with more than 300m korunas ($13.5m) invested in processes and plants in the Czech Republic since its acquisition by the Volkswagen Group in 1991.

The 10m-unit milestone was reached in 2006, and in 2014 Skoda produced over 1m vehicles in a calendar year for the first time.