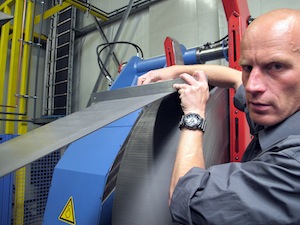 Germany – The equipment was installed at the company’s premises in Attendorn in June last year, upstream of a 400-ton press also supplied by Schuler, and has generated increased output and part quality while decreasing energy consumption.

“Until the end of the ‘90s, we used levellers with nine rollers as we used to produce guide rails from relatively soft materials,” commented Guido Scheider, chief technology officer at SKA. As the requirements for materials and tolerances increased over the years, the company found that multi-roller levellers were not wholly adequate for its operations.

Schuler offered to run tests with different strips of material on one of its levellers, as well as providing onsite expertise. “It turned out that the number of rollers was not the decisive factor,” said Schneider. “In fact, a 17-roller machine with significantly higher rigidity was the better choice for us.”

The equipment that was installed last year has been running without downtime, and Schneider says it “can generally balance out fluctuations so well that nothing is noticed in the die or product”, although the raw material also has an impact. “Schuler proved that the fine leveller could straighten cross bows in exactly the quality we need,” he explained. “In the past, we often had to readjust the die on a press because the material properties changed within a few metres”.

SKA produces precision stampings for automotive safety equipment, such as seat belt systems, seats and airbags. The company uses press lines with up to 630 tons of force and dies that are four metres long.