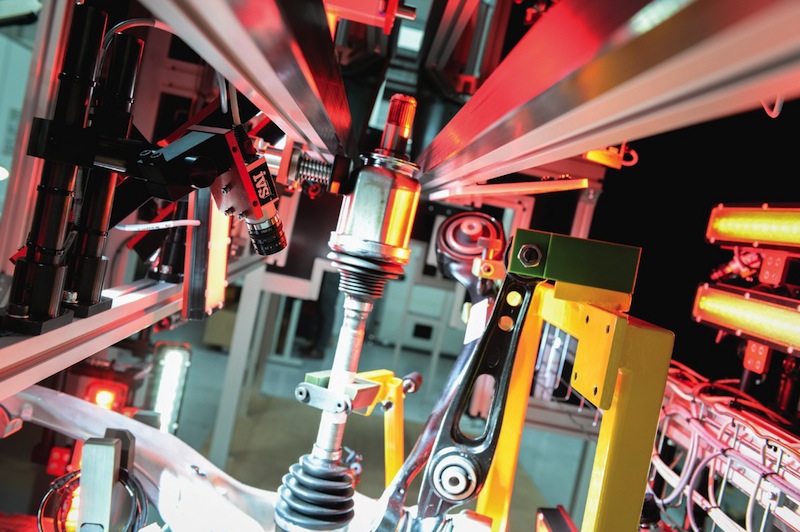 The automotive industry is a major consumer of machine vision systems and can proffer numerous examples of successful installations on almost all continents. For instance, Industrial Vision Systems (IVS) has recently designed and built a 15-camera, integrated machine vision system to inspect front- and rear-suspension corner module sub-assemblies produced by a tier-one supplier for a UK automotive plant.

The corner assembly modules comprise a number of components, including the driveshaft, the wheel suspension system – with wheel knuckles and hubs, dampers, springs, and lateral and tension suspension arms – as well as the braking systems.

To inspect the sub-assemblies, the multi-camera, PC-based vision system is provided with specifications of the components assembled into each specific corner unit from a Siemens PLC over a Profibus interface. Once the cameras have captured images of the parts, they are transferred via a GigE PoE (Power over Ethernet) interface though a hub to a PC, which then uses IVS software to process the images and ensure that the correct variants have been fitted.

Checking driveshaft installation
One important inspection task performed by the system is to check whether the correct size of driveshaft has been installed. To do so, a 1,296 x 966 pixel CCD camera captures a monochrome image of the driveshaft which is backlit by a red LED. The image is then processed to determine the location of the edges of each side of the driveshaft from which its width can be determined. This unique width can then be correlated with the model type of driveshaft fitted to the assembly.

In addition, the system must ensure that a retaining ring has been installed on the end of the driveshaft itself. With this in mind, two monochrome 1,296 x 966 pixel CCD cameras are deployed to capture two images from two different perspectives of the regions surrounding the recession in the shaft into which the retaining ring has been fixed. By analysing the contrast of the region surrounding the recessions in the backlit images, it is then possible to determine whether the retaining ring is present.

An IVS 15-camera, integrated machine vision system inspects front- and rear-suspension corner module sub-assemblies
Verifying the presence of the brake pads on the wheel assembly, as well as the version, size and colour of brake calipers, are other important inspection operations performed by the vision system. So too is determining whether the correct brake-pad wear warning indicator has been fitted.

The cameras are positioned in such a way as to capture an image not only of the brake pads, but also the brake disc and the brake-pad warning indicator. They also detect the colour of the caliper, providing an indication of the specific model type used in the brake assembly.

Other inspection tasks performed by the automated IVS system include determining whether a left- or right-handed knuckle is fixed to the hub, and deducing if the arm nuts at the end of the suspension units are present and have been tightened. Lastly, a further camera is used to determine that the correct left- or right-handed lateral arm has been fixed to the unit by analysing the shape of the arm as it is presented to the system. The image is also processed by the software to determine the presence of a bush which attaches the arm to the chassis of the vehicle.

If the corner assembly passes all of the inspection procedures, the unit continues down the production line and is readied for shipment to the vehicle manufacturer. Should a unit fail any of the inspections, the results are displayed to a user on a visual display attached to the vision inspection station. The sub-assembly can then be removed from the production line and the appropriate modifications made to the unit prior to shipment.

Since the vision inspection station was installed at the tier-one supplier, it has replaced the need for the corner assembly modules to be inspected manually by skilled operators. 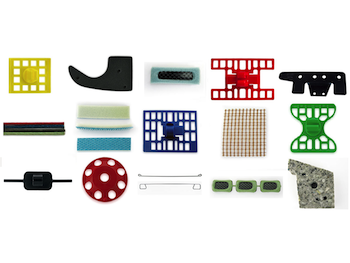 Dakota checks the parts inserted in the mould before injection
Reducing wastage
There is little doubt that machine vision systems can be enormously beneficial when inspecting automotive components and assemblies. Another case in point is Dakota, the name given to a vision system designed to inspect polyurethane blocks used for the manufacture of car seats. This application provides a return on investment for the customer through a more efficient inspection process and a reduction in the use of raw materials. The system also offers the added benefit of protecting the environment due to lower material requirements.

The development of the Dakota system began in 2012 and has since evolved through close co-operation between Gips Vision and Stemmer Imaging France. Frédéric Equoy, founder and CEO of Gips Vision, says: “On the foam production line, the Dakota system is used immediately after insertion and checks, directly before injection moulding commences, whether every component in the mould is inserted and positioned correctly. Depending on that, the system validates or declines the next step of foam injection.”

The system saves material which would otherwise be completely wasted. This is because a solidified faulty part cannot be used again. Another advantage for users is the reduction of customer complaints due to poor quality and returns of supplied products.

The 3D imaging system is based on laser triangulation. Here, the injection mould is scanned by a laser illumination unit manufactured by Z-Laser. A camera captures up to 1,000 laser profiles per second with a width of 2,000 pixels. The known angle between the camera and laser level allows the height information to be extracted from the laser profile based on exact calibration (and adapted to the line and mould configuration). In this way, the system creates a 3D image of the mould and its inserts, which allows for their localisation in three dimensions.

The evaluation of the 3D image permits a reliable assessment of whether all parameters meet the requirements and the injection-moulding process can be initiated. For every slide, Dakota inspects the components or inserts that are placed into the empty mould immediately before injection and need to be present in the completed foam block. These inserts can be composed of many different materials, sizes, thicknesses, colours and forms: metallic wires, plastic clips, fabrics and foam blocks, for example.

Dakota offers a dedicated, graphical and easy-to-use human-machine interface which enables the definition of test points and the configuration of the applied tools. Up to 999 different mould specifications can be programmed in Dakota’s database and up to 999 spot checks can be carried out on every mould. Moreover, the system can be adjusted to moulds and slides of different sizes, and to variable production-line speeds.

Equoy cites an application example, where the Dakota system checks moulds with a size of 1,700mm, which corresponds to the total size of a complete rear seat, on a conveyor at a speed of 14m/min. According to the CEO of Gips Vision, the system’s performance limits have not yet been reached.

Combining vision systems with robots
Of course, in discussing vision technology it is necessary to mention robots. The combination of vision systems and robots has done much to improve quality systems at automotive plants around the world. Among the latest movers in this market is Vitronic, which is now offering robot inspection cells with machine vision as a single-source inspection solution that can be integrated directly into existing production lines.

Robot cells with the Vinspec surface-inspection system detect faults and defects on visible, sealing and functional surfaces, as well as contour and surface imperfections on metallic components. When used in conjunction with camera-based surface and contour inspection, the system identifies defective components in the production process, separating them out for reworking as required. Typical applications include the inspection of crankcases (cylinder running surfaces) and cylinder heads. 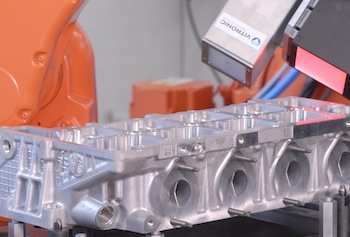 Vinspec examines machined surfaces such as the internal bores of drilled holes by using an internal inspection sensor
Vinspec inspects machined surfaces such as the bores of drilled holes using an internal inspection sensor. Flexible, optical inspection with robots is implemented as a handling unit by means of adapted gripper technology and 2D or 2.5D sensor technology. In addition to the benefit of more objective defect classification in dimensional view, this also results in a higher detection rate on poorly visible surfaces. The system records even the smallest of defects using high-resolution matrix and line-scan cameras. According to Vitronic, the image-acquisition technology is able to overcome ‘pseudo’ defects caused by dirt or spots of water on components.

One of the features that makes robot cells highly cost effective is that component parts can be changed during production runs without stopping, simply by changing the inspection and robot programme.

Also marrying robot motion and vision technology is the Robot Vision Centre from Attentra, which has been seen at recent exhibitions combining 2D imaging with 3D laser triangulation (all mounted on a robot arm) to validate car bumpers; checking for the presence of screws or that parking distance sensors are installed correctly.

The system has been supplied to Audi for inspecting bumpers on the A3 and TT models. Although different in design, both bumpers can be inspected using the same system. The Robot Vision Centre is customised depending on the application, with different lenses and cameras (3D and visible spectrum) deployed accordingly.

Moving toward portable vision systems
Another marked trend in the automotive industry is the use of portable vision systems, such as those offered by 8Tree. The battery-powered 8Tree system is capable of scanning large objects like car bodies to inspect for dents. The system projects a structured light pattern onto the side of the car, with any distortion captured by a Manta G-031B camera from Allied Vision. Anomalies or defects on the car body are highlighted with colour and its dimensions displayed.

The use of structured light to perform a 3D scan, along with camera technology to capture distortion via a special grid pattern, means that the measurement is performed within a matter of seconds. This is thanks to fast projection and rapid pattern sequence capture capability: the Manta G-031B monochrome camera captures the images at frame rates of up to 125fps at full VGA resolution.

LumiTrax machine vision lighting technology from Keyence is a fusion of high-speed cameras, intelligent lighting and inspection algorithms. The system is said to perform stable inspection imaging regardless of workpiece variations or environmental influences such as ambient light. Multiple images are captured while lighting an object from different directions. Processing multiple images allows separate detection of surface irregularities and workpiece patterns. 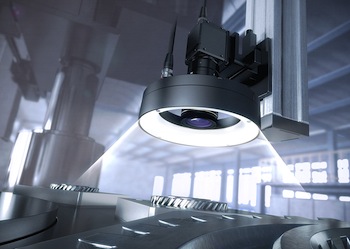 Machined parts are inspected by LumiTrax machine-vision lighting
LumiTrax uses a newly developed high-speed camera and high-speed segmented lighting to capture the target workpiece. Shadowing is analysed and a shape image is created to allow inspections that were previously impossible with standard 2D vision cameras, says the company.

The algorithm combines these images to create both ‘shape’ and ‘texture’ images. A shape image extracts only height changes, eliminating the influences of surface variation, colours or printing, while a texture image eliminates the effects of glare. LumiTrax combines the images automatically, even when a part is moving under the camera.