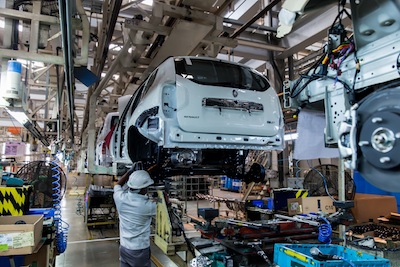 The Oragadam plant in Chennai makes vehicles for both Renault and Nissan; AMS reports on the dual production

The Renault-Nissan Alliance has manufacturing facilities in every continent, but only one site serves both brands. The group’s plant at Oragadam, near Chennai in India, turns out five models for Renault and five for Nissan. On February 1 it also became the first factory to start production of the GO, a small car to be sold under the resurrected Datsun nameplate, and it makes a small number of Stile minivans for Ashok Leyland.

The manufacturing logic behind a shared facility is irrefutable, as is the case for the plant’s location. India imposes high import taxes which more than double the cost of cars built outside the country, yet it is essentially a low-price market; the volume is for cars costing the equivalent of €3,500 ($4,800). By manufacturing together in India, the Alliance is better able to compete with domestic brands while enjoying economies of scale.

The location of the plant Chennai, in the south-east corner of the sub-continent, places it at the heart of the Indian automotive hub. Chennai International Airport is only 35km to the north, the export port at Ennore is 80km to the north-east and there is a strong local supply base of more than 50 companies. The Alliance also has a technical and logistics centre, which houses one of two Renault Design India offices, half an hour away by road.

History & philosophy
The Oragadam plant was always intended to be a joint facility. Construction work on the facility started in 2008, it was inaugurated two years later and there are now two main production lines plus a smaller one to assemble CKD versions of Renault’s Koleos and Fluence models and the Nissan Teana. [sam_ad id=17 codes='true']

The main line, which began operations in 2010, builds the Renault Duster and Scala and Nissan’s Sunny, Evalia and Terrano. The second line was added in 2012 and is responsible for smaller cars: the Nissan Micra and related Renault Pulse, plus the Datsun GO. The factory is able to build cars on four platforms with eight body styles in random order.

After the May shutdown, the Chennai plant will be readied to start work on entry-level cars – one for Renault and one for Nissan – using the CMF-A architecture. This will take total investment up to $1.3 billion.

Chennai also has its own powertrain facility, with two lines each able to build 200,000 units a year, one that came online in 2010 and the other in 2012. It manufactures 1.2-litre three-cylinder and 1.5-litre four-cylinder petrol engines and the 1.5-litre dCi K9k four-cylinder turbodiesel. Last year, the plant added engine moulding and machining systems and started fully local production of five- and six-speed manual transmissions.

Chennai is the main production centre for the Alliance’s ‘frugal engineering’ models which are intended to meet the needs of low-price markets. Frugal engineering, in the language of the group, means ‘doing more for less’ to control costs and the use of resources. However, this ethos is extremely labour intensive; even in the welding shop the level of automation is only 14%. Currently, automation is used only where it will improve quality or ease of working, although increased use of machinery is being considered and the factory could automate up to 85%.

Chennai was the first plant to adopt the latest Alliance Integrated Manufacturing System (AIMS) and Alliance Production Way (APW), philosophies which tap into best practices at other group sites for maximum efficiency. It employs the monozukuri (‘making things’) and kaizen (‘constant improvement’) principles that are standard throughout Alliance manufacturing sites.

Stamping & welding
The press shop at Chennai can produce 173 different parts using 344 dies on a variety of Rotem presses exerting between 200 and 5,400 tonnes of pressure. It employs 356 people working in two shifts on three lines. Two are for extra-large outer parts while the third is for smaller stampings. One unusual feature of this set-up is the L Line for parts such as wheel housing inners, which is staffed by teams of six women with a female overseer.

Parts are produced in batches of 450, which takes 45 minutes, then the dies are changed. They are moved manually before being loaded automatically, and each changeover takes 40 minutes. Along with some imported sub-assemblies, parts are then loaded onto colour-coded pallets that identify which model they are for.

The Alliance has identified 65 ‘hazards’ in the stamping shop, so it trains new employees thoroughly over a period of three years, starting with miniature models of the processes which enable workers to see where the dangers lie without having to face them. The average age of stamping shop workers is 24. 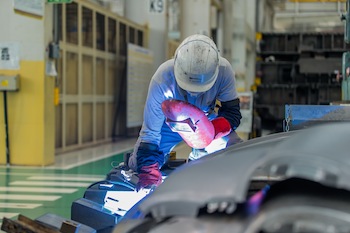 Like other activities at Chennai, most welding is done by hand
In the welding shop there are two lines, each almost a mirror image of the other, both covering more than 23,000 sq. m. Line 1 has 107 stations and employs 1,066 staff divided into three shifts, with 17.3% automation, while Line 2 has 100 stations, just over 500 workers and operates on two shifts with 23.6% automation.

Each worker is trained in three jobs to ensure maximum flexibility, and the proportion of female staff is 3%.

Painting & final assembly
There are two paintshops at Chennai, each on two floors, and covering a combined area of nearly 50,000 sq. m. Line 1, the slightly smaller of the two, employs 388 personnel operating on a three-shift system, while Line 2 has 184 staff on a two-shift basis. Of these, 5% are women.

All exterior painting is done by robots, and both lines save energy by eliminating the need for a surface oven by using the latest wet-on-wet painting technology. The electro-deposition oven eliminates emissions through thermal oxidation regeneration. From the ED oven, cars are sent to receive their sealer, which is baked on. They are then sanded before receiving three layers of solvent-based topcoat. After baking and inspection, they are waxed and forwarded to the final assembly area.

Chennai is able to build so many different cars in random order on only two lines thanks to the Alliance’s platform-sharing strategy and common working practices. There are standard underbody systems, which aid flexibility and parts supply, and many of the assembly operations are similar.

However, as the only joint production centre within the Alliance, the plant does face complexities which are not experienced at other plants. For example, the parts pick-up systems for Renault and Nissan are different. 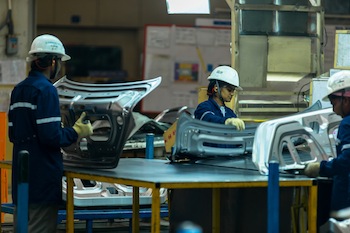 The Chennai plant has a relatively high proportion of female workers, compared with the industry standard in India
Altogether, there are 148 stations from the start of trim assembly to drive-away, with the maximum time allowed to complete any one task being two minutes. That means it takes around two hours for cars arriving from the paintshop to leave for final inspection on the tester and customer satisfaction lines. As in most areas of the plant, in the final stages there is a low level of automation.

There are 1,865 workers with an average age of 22, and women make up 6%. All these personnel are encouraged to come up with ideas to cut costs – one such solution involved storing oil containers on the tilt so there is less wastage – and any employee can stop the line if a defect is spotted. Staff are told not to accept any faults from a previous operation, not to make any and not to pass any on to the next workstation.

The engines are modified from those in Europe to suit Indian conditions. The K9k diesel engine, for example, has a lighter oil pan that is cheaper to produce and is better protected against the effects of the monsoon floods, which are often bonnet-deep. The adaptations are mainly to suit the capabilities and materials of local suppliers.

Engine production has increased from 10,000 units to 175,000 between 2010 and 2013. Overall, output at Chennai has been consistently rising, from 75,000 vehicles to 238,000 during the same period. With an upturn in the Indian market expected in 2014, Chennai expects to build 300,000 cars. This is well short of capacity, but with the advent of further models based on the Alliance’s CMF-A architecture and a significant increase in Renault’s market share planned, the plant will get closer to its maximum capability in the years to come.

Last year 70% of the cars from Chennai were for Nissan, but Renault is on a mission to claim 5% of an Indian market which could be as large as 9m vehicles a year by the end of the decade. There are also plans to raise local content from its current level of 60% to 71% as soon as possible.