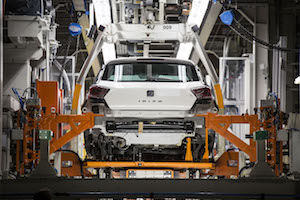 Spain - The Spanish OEM has been producing vehicles at its Martorell factory, which is located North West of Barcelona, since 1993. Around 10 million units featuring 39 different models have been made at the plant.

“Martorell is synonymous with progress and growth," commented SEAT's President Luca de Meo. "The factory is our production flagship, so we are very happy to celebrate these 25 years since its inauguration." He also wanted to underline the significance of “celebrating 25 years when the factory is in one of its best moments thanks to the new models we have launched (Ibiza and Arona), our investment in R&D, the quality of our vehicles and above all, the employees, who do their jobs with commitment and enthusiasm."

The plant is currently operating at 95% capacity with 2,300 cars rolling off the production lines each day. Production volumes have grown by 50% since 2009, and a total of 455,000 units were made in 2017 alone. This makes Martorell the largest car factory in Spain and one of the highest volume facilities in Europe.

Martorell is also central in SEAT's plan to make its production processes more efficient and sustainable. The company recently announced that it managed to reduce energy consumption by 23.2% and water consumption by 24.5% over the past five years, and is now aiming to half the overall environmental impact of the plant by 2025.