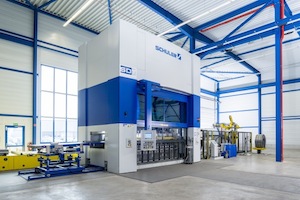 Germany – The company will manufacture at four locations instead of seven at present, with consolidation costs of around €55m ($62m) prior to annual savings of €30-35m. Schuler says that around 450 personnel will be affected, with some transferred to other sites.

Production of presses and new machine components will be discontinued at Netphen by the end of 2016 as well as Waghäusel and Weingarten by the end of 2017. External assembly, commissioning and service will be maintained at all three sites, as will engineering and support activities.

The Göppingen plant will produce all presses which can be fully assembled and put into operation in-house, becoming the company’s only German production site for large-scale presses. Schuler is investing €40m for a new technology and development centre, plus a test facility for lightweight construction in the automotive industry.

The company noted that it has expanded its manufacturing activities in foreign markets over the past few years in response to “shifts in its global demand profile” and that changes in its product mix “have also resulted in revised capacity needs”. Schuler has entered new market segments, such as equipment for the production of large pipes or high-speed train wheels, for which it acts as a systems supplier and buys in a large volume of components, therefore reducing in-house production.

“We merge the wide range of production sites in Germany resulting from acquisitions made in the past. This will create more efficient manufacturing structures and help us remain successful in the face of fierce international competition,” explained Stefan Klebert, CEO at Schuler. He added that Germany “will remain our high-tech location and home base – despite all our globalisation activities”.

In 2011, Schuler launched a strategy and growth programme in connection with the acquisition of Müller Weingarten in 2007. This involved realignment with target markets and technology fields, the streamlining of the business and a reduction of duplicate structures. The strategic project continued in 2013 in order to tackle changing global challenges and return the company to financial health.