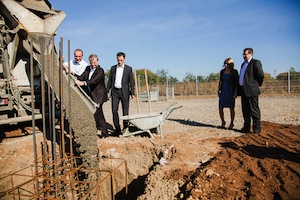 Romania – A second production hall of around 4,000 sq.m will be constructed to significantly expand capacity and the company’s product portfolio. The existing plant, which opened in 2004, currently makes 70m metres of corrugated tubing each year for automotive and industrial applications.

“In future, Schlemmer Romania will also manufacture injection-mould products here,” stated CEO Josef Minster. The building work is due for completion by the start of winter, with the production equipment to be installed shortly after. Local companies will be used for installation technology and controls.

CFO Christian von der Linde added: “By expanding our plant, we are aiming to double turnover in Satu Mare. Both the eastern European market and the current order situation for Germany and other countries have made this expansion urgently necessary.”

Over the past few months, Schlemmer Romania has used a mobile factory to compensate for production bottlenecks. Housed in a special container, the self-functioning extrusion plant can be transported by lorry and is capable of making up to 62,000 sq.m per day in a three-shift operation, based on average corrugated tubing with production of 22 metres per minute.

In line with the building expansion, the Satu Mare workforce will grow from the current 120 individuals to 210. General manager Alin Stavariu suggested that the site will see yet more growth: “After the current expansion, we will have used only half of the two hectares of land that we have purchased. A lack of space will thus not be an obstacle to a third expansion in future.”