Rolls-Royce to lay Phantom to rest 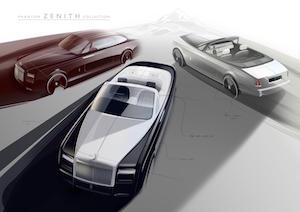 UK – The current model will end production this year, following the recent announcement that Rolls-Royce has started testing its new, aluminium architecture which will underpin all future vehicles from 2018. The maker also confirmed that the Phantom coupe and drophead coupe will not be renewed.

The seventh-generation Phantom started production at Rolls-Royce’s Goodwood factory over 13 years ago and is regarded by the company as “the foundation” upon which its renaissance was built. An extended wheelbase version was added in 2005, followed two years later by the drophead coupe, and the coupe in 2008. The last coupe and drophead coupe will be made in November; limousine production will also cease this year.

“I am proud and excited to announce that a new Phantom is on the way – a contemporary and beautiful Phantom enhanced with cutting-edge technologies and design innovations,” said Torsten Mueller-Oetvoes, CEO of Rolls-Royce Motor Cars, adding that the company is “working hard on perfecting the Phantom VIII”.