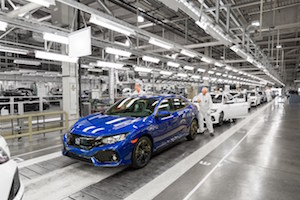 UK – The first units of the tenth-generation have now rolled off the production line and been shipped to North America, one of 70 export markets which will also include European countries. The factory has completed a £200m ($260m) upgrade so that Honda of the UK Manufacturing (HUM) can become a global production hub for the Civic hatchback.

“As we reveal this new Civic, we look forward with confidence as we expand the role of our Swindon manufacturing plant,” said Katsushi Inoue, president and COO of Honda Motor Europe. “Honda has made significant investments in this facility and this next step is an important endorsement of the skills and expertise of our workforce. We’re also setting out a clear and sustainable future role for HUM, broadening our export markets beyond Europe.”

Swindon is Honda’s flagship plant in Europe and plays an important role in its global production network. The factory has received a total of £2.2 billion of investment since 1989 and currently employs 3,600 individuals. HUM made its three millionth car in 2015 and this year celebrated its 30th year of operations.