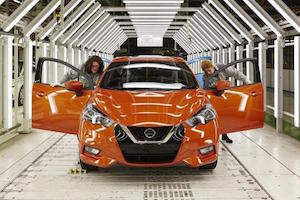 France – Nissan’s Alliance partner has been making the fifth-generation model for the past few days at its factory in Flins. This marks the return of Micra production to Europe after a break of seven years and also the first time that a Nissan passenger car has been manufactured by Renault in the region.

The cross-production of vehicles is claimed to be a key driver of manufacturing synergies in the Renault-Nissan partnership, maximising the benefits of the Alliance Production Way. This shopfloor management system enables plants to improve their capacity utilisation as well as using benchmarks and best practices from both brands to meet high quality standards.

Launched in 1952, Flins is Renault’s oldest car plant and has substantial experience of producing hatchbacks for the European market. It sits on 2.37m sq.m of land and makes the Renault Clio and Zoe, and now the Micra on a modified version of Nissan’s V platform. The first Micra was unveiled in Europe in 1983 and sales have surpassed 7m worldwide.