Renault sets up JV with Dongfeng 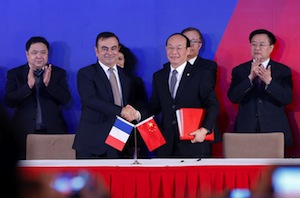 China – Final approval for the 50:50 joint venture was granted by the National Development and Reform Commission of China (NDRC) at the beginning of December 2013.

Representing an investment of 7.76 billion yuan (€870m), Dongfeng Renault Automotive Company (DRAC) will establish a 95-hectare manufacturing plant in Wuhan which will involve the creation of 2,000 jobs. The initial production capacity will be 150,000 vehicles per year.

DRAC’s product plan will commence with a new range of crossover vehicles under the Renault brand. At a later stage, a range of models will be introduced under a local brand. Production and sales are scheduled to begin in 2016.