Since launching in 2000, Busan Plant has developed into a flexible and productive operation. The OEM has pushed through a 'Big Deal' with unions which halts the automatic wage increase typical of South Korea 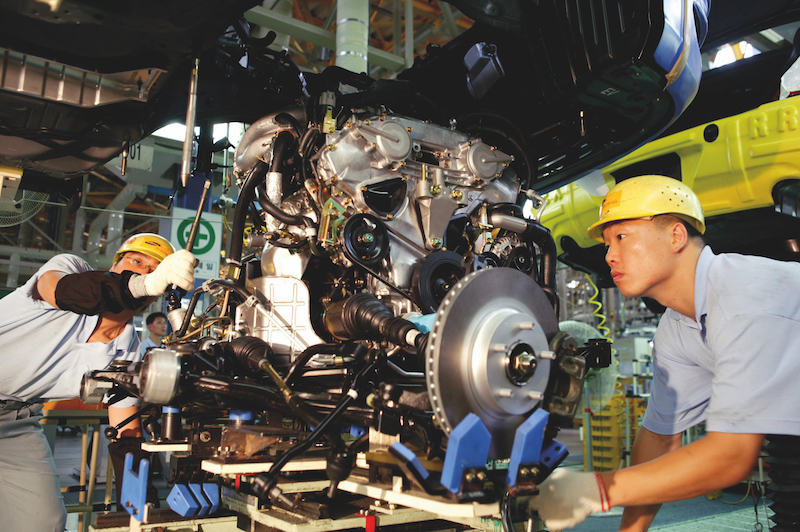 Busan in the south-eastern corner of Korea is the location for Renault Samsung Motor’s (RSM) sole vehicle production plant. The facility, covering an area of 56,000 sq.m and employing 2,600 workers, has a production capacity of around 300,000 units per year. With the addition of the new Koleos, the plant’s single 2km-long assembly line now produces eight different models. Busan has full production capability, from press shop and body assembly through paintshop to final assembly. The site also has an engine production unit and foundry.

Getting Busan’s operations to be flexible enough to build this number of models has been challenging. Members of the production team, interviewed for a Renault video piece, discussed how RSM had approached the task. Hyunmoo Chung, team chief for the assembly line explained: “It wasn’t easy at first, we optimised production and centralised the parts so that operators could work more efficiently. We reduced lost time through kitting and by synchronising the production flow, making sure there was no dysfunction on the production line. Also, our supply system allows us to gauge the quantities of parts needed.”

Having a well-trained workforce was also important. “When new employees join us they receive a month’s training. After this they are frequently observed by supervisors,” said Youngbum Song, manager of Assembly Team 1. He added: “Every six-12 months, the workers are rotated [across different roles] for better efficiency.” 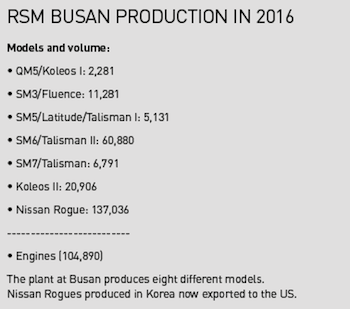 Production line jobs are often repetitive, so RSM ensures that workers are able to rest during their shift. Supervisor Hyenkwon Kim explains: “During the manufacturing process, some phases are physically tiring, so operators who deem it necessary are allowed to relax for a moment before returning to their station.” He goes on to demonstrate what might best be described as a specially designed, upright bed which allows the worker to stretch and take the weight off their legs and back.

In addition to the RSM vehicles built for the local market, the plant also manufactures vehicles for export, most significantly the Nissan Rogue – the top-selling passenger car in the US. Busan received a big boost in July 2012 when the Renault-Nissan Alliance announced plans to invest $160m in Korea to help meet demand for this model in the US and to accelerate the growth of RSM. Production of this crossover started in 2014. The plant also builds the Fluence-based SM3 electric car, which was Korea’s most popular electric vehicle from its launch in 2013 to the end of 2015, on sales of just 1,767 units.

Another RSM site is the Kihueng Renault Samsung Technical Centre (RSTC), located near Seoul. Employing teams of Korean, Japanese and French engineers, operations at this engineering hub include prototype development and specialised testing for chassis, powertrain, emissions control, electronics and safety. The RSM Design Centre in Kihueng is a fully integrated part of the Renault Design global network and is referred to by the parent company as a design bridgehead for the Renault Group in Asia.

Renault’s chairman of the Asia-Pacific region, which includes overseeing Renault Samsung Motors in Korea, was also CEO of Renault Samsung between 2011-2016. Nick Gibbs spoke to him about staying competitive in a market dominated by Hyundai-Kia.

What do you build in Korea at the moment?We build the Talisman [sold as the Samsung SM6] and we build the new Koleos [the QM6], and we are very successful with both. We also produce [the Rogue SUV] for Nissan for the US. We are dedicated to the domestic market but we also use Renault Samsung as a strong competitive footprint for our operation in Asia. Korea is very demanding in terms of quality.

How do you compete with Hyundai-Kia, given its enormous size advantage?Firstly, we compete with product. Our strategy in Korea is not to copy Hyundai-Kia, it is providing to the Korean customer something a little bit different, to identify the new trends in the market. When we launched the QM3 [the imported Renault Captur], we created the B-SUV segment. It was not an offering Hyundai had.

And how about on manufacturing cost?Manufacturing is getting expensive because of wages and social troubles but this is one part of the car [production]; the supplier footprint remains very competitive.

How are you countering rising costs?The way we mitigate this compared with other OEMs in Korea is to implement agreements with the unions similar to those which Renault implements in Europe. We took this know-how and shared it with the union in Korea and in 2014 were the first one to sign what has been described as an historic agreement.

What was the most significant part of that agreement?In Korea we have an automatic wage increase – it’s very famous. But we were the first automotive and big industrial company to stop this wage increase through agreements with the unions.

What was the key to getting employees on side?The key was to share our vision about where we want to go together and lots of internal communication by the Korean management. And at the end, the management were able to convince the unions to accept what was called the ‘Big Deal’; on the one side, a sacrifice for employees on wages but on the other side, more opportunity to have more projects, more volume and therefore more sustainability for the company.

You said that the supplier footprint remains competitive, but how can it, if you don’t have the volume?We have a 300,000-unit capacity at Busan and last year we produced 240,000, so we have enough volume assuming standardisation, and for this we can use the Renault Nissan Alliance platform. So thanks to this we have enough volume. Our current suppliers understand that if they are competitive with Renault-Samsung, they can enjoy opportunities out of Korea. For example, our current suppliers in Korea exported in 2015 €400m ($455.5m) worth of parts to other entities in the Alliance. In total, Renault Samsung is buying €2 billion parts in Korea, globally. So exports are on top of this.

Where is the Korean market heading?It’s a mature market; we expect slow, steady growth. The [proportion of] SUVs is growing in Korea, but is less than in China, maybe 30% compared to 40% in China.