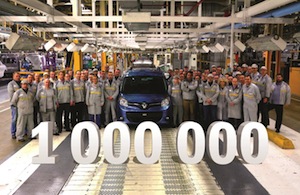 France – The milestone second-generation vehicle, destined for Japan, was added to the total of around 3.2m units of both generations to have been made since 1998. The model was redesigned in 2007 and is now produced in four versions: the Kangoo Compact, Kangoo Express, Kangoo Maxi and the electric Kangoo Z.E..

Maubeuge also manufactures the Mercedes-Benz Citan under an agreement with Daimler. Renault’s own range of light commercial vehicles is made in France; aside from the Kangoo at Maubeuge, the Trafic and Master vans are produced by the Sandouville and Batilly plants.