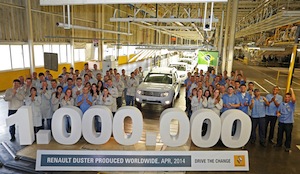 France – The total is a combination of Dacia and Renault-branded vehicles produced worldwide and has been achieved four years after launch. The milestone vehicle was made at the Renault plant in Curitiba, Brazil, for the local market.

The Duster is assembled at five locations: Curitiba, Brazil; Envigado, Colombia; Pitesti, Romania; Moscow, Russia; and Chennai, India. Curitiba and Moscow produce the vehicles with Renault badges, while Pitesti and Chennai cater to both brands. The plant in India joined the production location line-up in 2012.