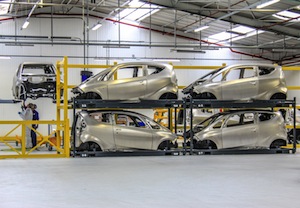 France – Assembly began this month of the all-electric city car, which was previously made only in Italy. The vehicles are being assembled from bodies and parts brought into the plant by Bolloré.

Renault Dieppe, which was established in 1969, specialises in small production runs and currently makes the Clio RS 200 EDC and competition vehicles. The Bluecar is being made in a special assembly shop within the plant which will eventually have a 30-strong workforce, meaning that Bolloré has access to a modern production system adapted to its requirements.

“Bluecar is a great additional business opportunity for the Dieppe plant, and we appreciate Bolloré's trust in Renault Group’s capability to meet their exacting quality and response-time demands,” said Laurent Delannay, director of Renault Dieppe.