Qoros – a showcase for innovation

A joint venture between China’s largest independent car manufacturer Chery and a global industrial company, Qoros aims to release its first model in 2013. Its paintshop partner is Geico spa of Italy

Building a paintshop for a completely new brand of car is a rare opportunity as Luigi Lazzari, Executive Director Europe-Africa and Paolo Colombaroli, Executive Director Innovation; Proposal and Advanced Engineering at Geico tells APS. Luigi Lazzari: “Qoros was a very exciting contract for us as we had the chance to equip a new paintshop with the latest Geico products and systems.” And the response from Chery has been excellent, at a presentation that Chery made at an event recently, the OEM talked of the Qoros project as having the most modern paintshop in China.

Robot partners and material choices
Qoros is using a primerless system instead of 3-wet or other legacy systems, in the style of PSA’s Sochaux plant’s Paint 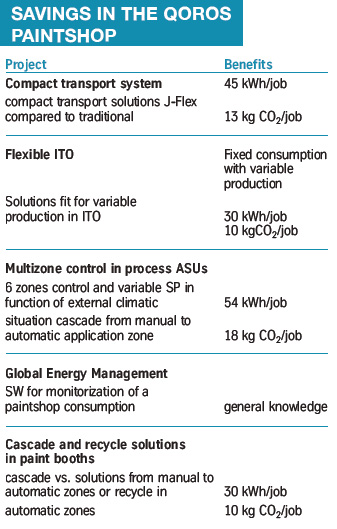 Process Compact (PPC). Geico provided the full paintshop, with its PT/ED transport system J-Flex incorporated. The project gave Geico’s team an ideal opportunity to build-in some energy saving process management as Lazzari tells me: “The energy figures (and savings) are based on the predicted primary level of production, there will be even greater savings as production increases. At present the interior painting is manual; when the interior painting is robotised, there will be a further reduction in power consumption (kWh/job), as there will be a lower demand for air and the booths could be reduced in width.” For the Qoros project, the team chose ABB robots with ABB atomisers fitted.

Qoros is not using a phosphate pre-treatment but a zirconium-based process and waterborne basecoat with a 1K solvent-borne clearcoat. As Lazzari explains: “The zirconiumbased material is much more adaptable to aluminium and mixed-material bodies and this process enables you to reduce sludge formation to a minimum, at the same time providing a dramatic reduction in energy usage.”

I asked Lazzari about the feasibility of using Geico’s Speedry system which uses infrared radiation with a dynamic emission spectrum on the very high build of primerless colour coats. He explains the company’s developments in this area: “We are integrating a part of the Speedry technology into an actual oven; Speedry will be used mainly for parts of two-tone lines, concentrating on roof sections, but part of the technology will be 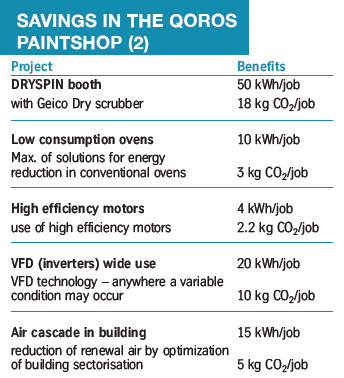 used as part of the new oven design we are working on. This will be a mixture of infrared and convection heating.”

He explains: “The idea is to use catalytic panels to heat and dry the top coats, as a heat source supplementary to the usual gas heating. The catalytic panels can be turned on and off very quickly and this can help to have downtime overnight, with the gas heating switched off and have a guaranteed rapid start-up time. We are working on how this method will work with different paint processes. We foresee a mix of conventional ovens and catalytic lamp panels being very popular; it will also add flexibility. Ultimately, I can imagine using the catalytic heating system alone in some new paintshops.”

Innovation centred in Italy
Geico’s expertise is born out of the company’s constant drive for improvement and innovation; it displays these ambitions at its Pardis Innovation Center in Italy. And Geico’s projects for 2013 will even more underline its concrete and effective approach to innovation. As a matter of fact, next spring Geico will inaugurate its new R&D facility which will be the new Global Technological Center of the Geico Taikisha Alliance. “At present, in our Pardis Center, we have installed the latest version of our J-Jump, and we have launched activities for new oven technology: a programme for developing new curing ovens, with the target of reducing energy consumption. This programme will be further developed during the rest of this year; the first modules of the prototypes have already been installed in the Pardis Center. Then we will develop and evaluate them in the first three months of 2013. “By the middle of 2013, we aim to launch some new oven products on to the market, that will be displayed in Geico Taikisha’s new Center, a brand new building adjacent to our main offices.” 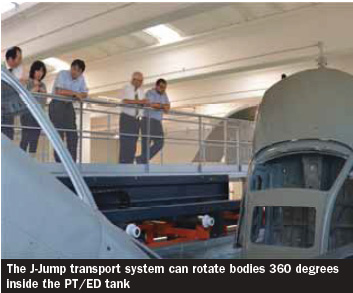 I asked Lazzari about the motivation to develop a new version of the J-Jump system: “It is a solution that the market is demanding, as the actual limit of the existing J-Jump is 25 jobs per hour (jph). What we have found with recent projects, a Mitsubishi project and a MPSA project, both in Brazil, was that the practical limit was 25 jph.

“We analysed the system and we could see that there was some space to enhance efficiency and to obtain, with the same amount of ED coating material and energy, up to 30 jph. You do not often see production capacity required at 30 jph; such a production capacity is very commonplace for paintshops, both for stand-alone production systems and for first-phase rate in 60 jph capacity projects."