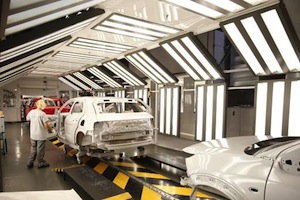 France – In order to capitalise on growth within the region, the OEM will make an extra 60,000 vehicles by the end of August this year, raising volumes 10% higher than initially planned. The volume increase will occur across all three of the Group’s brands – Peugeot, Citroen and DS.

For Peugeot, the ramp up will focus on the 208, 2008 and 308, including the 308 SW version. Meanwhile, the Citroen C4 Cactus manufactured in Madrid, Spain, will increase by 9,000 units; the model has exceeded its targets with orders of nearly 30,000 since January. The number of DS3 units made in Poissy, France, will also rise, as will volumes of PSA utility vehicles.

In connection with the ramp-up, operations will be intensified at the Group’s engine and gearbox plants in France, plus its foundries. Suppliers will also be expected to adapt to the increase in production. At the affected PSA plants, the ramp-up will require work schedule adjustments, the short-term deployment of additional teams and the recruitment of temporary workers.

“The positive development we're seeing in the market today means we can step up execution of the ‘Back in the Race’ plan, which was based on the assumption that the market would remain flat,” said Denis Martin, executive vice-president, operational director Europe, PSA. “With the support of our suppliers, and thanks to the flexibility provided for in the agreements signed with employee representatives, we are mobilising all our resources to meet demand from our customers.”