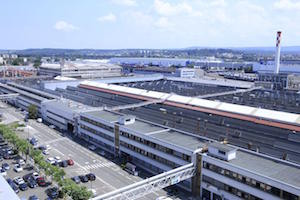 France – The vehicle-maker said that its ‘Sochaux 2022’ project, worth $210.7m, has been underway for the past 36 months at the plant in the east of the country. A multidisciplinary team is attempting to bring the 100-year-old site up to the level of other factories in the PSA Group; the OEM claims that it will become a benchmark plant.

Sochaux is currently a complex production location, with 24km of conveyor belts and numerous trucks transporting vehicle subassemblies during the manufacturing process. A key aim is to simplify the production flows by restoring coherence to the buildings on the site, reducing loading and unloading.

Further changes will be implemented inside the press shop, body shop and assembly hall. A large, high-speed transfer press line, which PSA claims is the first to be acquired in France in the past two decades, will produce multiple stampings in both steel and aluminium. Once modernised, Sochaux’s highly flexible production line will be able to produce six different silhouettes and 400,000 vehicles per year. A new assembly shop will be established closer to the other production buildings.

PSA says that Sochaux will also use digital tools, kitting and mobile operator platforms, enhancing both ergonomics and quality. According to the company, these changes will help to create workshops “designed for the 21st century” and will safeguard the future of the plant.

“Today, Sochaux produces emblematic cars for the PSA Group, including the new Peugeot 3008, which has been a huge commercial success, and will begin to manufacture vehicles for the Opel brand,” declared Maxime Picat, executive vice-president, operational director Europe. PSA is currently negotiating the purchase of GM’s European brand.