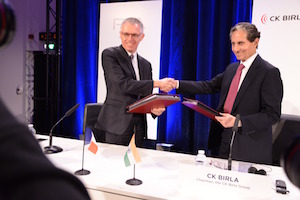 India – The collaboration will involve the production of vehicles and powertrains in Tamil Nadu by 2020. An initial investment of 700 crores ($107.3m) will be used to develop manufacturing capacity for 100,000 vehicles per year and will be followed by incremental increases to support longer-term ramp-up.

The agreement between the two groups consists of two parts, the first involving PSA taking a majority stake in a joint venture with HMFCL for the assembly and distribution of the French brand’s passenger cars in India. The second will establish a 50:50 joint venture between PSA Group and AVTEC for the manufacture and supply of powertrains.

The two companies stated that their collaboration would involve “a significant level of localisation, in order to reach the necessary cost competitiveness”. The capacity for powertrains will serve both domestic and global demand.

CK Birla, chairman of the CK Birla Group, said: “We have embraced ‘Make in India for India and the World’ for several decades and are among the early adopters of frugal manufacturing in the country.”

Carlos Tavares, chairman of the managing board of PSA Group, described the project as “consistent with the strong execution of our ‘Push to Pass’ strategic plan” and “a major step in PSA Group’s worldwide profitable growth in key automotive markets”.