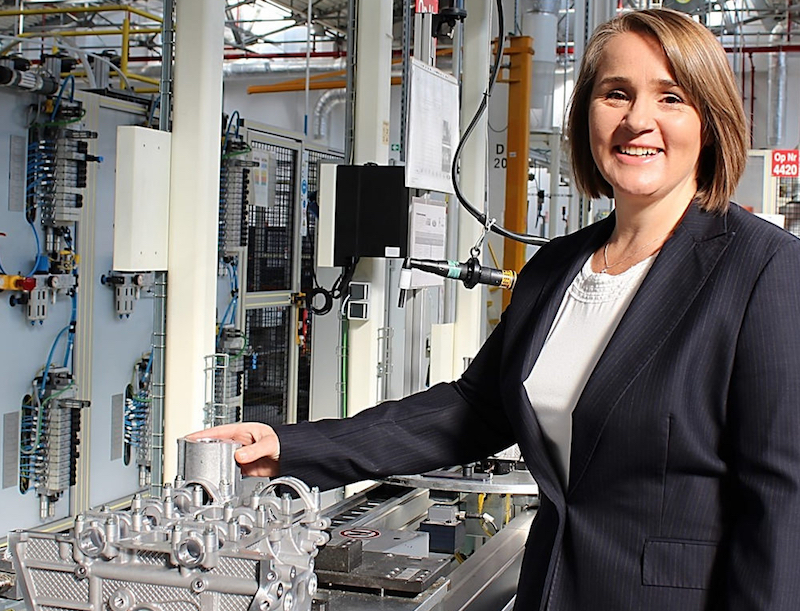 Jo Payne is no stranger to accolades, having been crowned winner in the manufacturing category of this year’s Autocar Great British Women in the Car Industry awards. She also won the award back in 2016. Payne is in charge of production of Ford’s multi-award winning EcoBoost engine at the OEM’s Romania facility. Following this year’s win, we met to discuss her varied career at Ford and the challenges of running a powertrain plant.

You’ve worked on a lot of projects globally for Ford, including at Bridgend, Wales; Dagenham, England; Valencia, Spain; Chihuahua, Mexico; and Taubate in Brazil. Which of these stand out as being particularly challenging or interesting?

Probably one of the most interesting projects that I worked on was in India, in Chennai, where we wanted to put a flexible facility into the Chennai plant. The Indian market was in a lot of flux between different legislation and government subsidies regarding gasoline and diesel; as a business we wanted to have that flexibility to move with the market. So, the challenge was to put in a new facility that could accommodate that.

We didn’t have a location within Ford where we made gasoline and diesel engines on the same line, and these were existing engine architectures. We didn’t develop a new engine to go down this line, so we had to work within the constraints of our current designs. Plus, we didn’t have a lot of time to do it; we did the whole thing in less than 24 months compared to a normal 36-month programme. Plus, there were all the challenges of working cross-functionally with our team in India.

When I first went to India our plant was designed in somebody’s head and I got there and there was some grass and a banyan tree – for the engine plant that was where we started. So you face many different challenges, including working with new suppliers, because we wanted to take some of that equipment from India, which we did, and try and develop them into world-class suppliers that we could use elsewhere. So, all of those challenges all came together on that project and I learned a huge amount. The main thing is, when you have your biggest challenges, that’s when you make your biggest breakthroughs, and we delivered it all; it was very successful and on time. But there were some really tough moments.

We have a lot of cleanliness requirements in there, which means we have to work in a sealed building. However, the tradition in India is that you use moving air to keep the building cool, and we built the building before we installed the air handling units, so you were installing production equipment in a building that was 45˚C inside, with no air flow.

What was the biggest challenge in trying to get the mix?We wanted to be able to have a ‘batch of one’ ability with no change-over time, because then you’ve got true flexibility and that’s really challenging when the architecture of the engine is completely different.The gasoline engines that we were looking at used bucket tappets, for instance, so the entire top end cylinder head has a completely different architecture. Whereas the diesel engine had roller finger followers. So, to install bucket tappets you’ve got to go through the whole process of measuring camshafts, measuring the camshaft in position, grading the tappets, and that entire process didn’t exist on the diesel engine. You need to be able to build them with no change-over and you want every individual on the line to be fully occupied whether they’re building a gasoline or a diesel engine.

Trying to efficiently mix the different manufacturing processes was difficult because we couldn’t influence the design of the engines, since both engines already existed. The diesel engine we developed with PSA (the 1.5-litre Duratorq engine made in Dagenham) and was already in production at around 2m units a year. The 1.5-litre Duratec gasoline engine was developed by Ford in the late ‘90s and made in Bridgend in high volume at that time. These established designs were our constraints and we had to find a way of doing it.And we had some opportunities in India; because of the area that we were in and the labour rate, we were able to do some process mixes manually that normally we would have automated.

I assume that the higher level of manual operations in Indian plants would provide flexibility, and would actually be an advantage for that kind of project?

Yes, it was certainly an advantage for us. However, we retained the level of automation that you need for safety and quality. There are certain operations that we would never do manually. For example, something like head bolt rundown, which has to be done synchronously at this kind of volume.

So there are certain hard points that we retained for quality. We used the opportunity to put manual processes in to give us this flexibility, but it’s still more automated than if you go to some of the other plants like Mahindra, which are running at much lower volumes.

The Chennai programme went in at a volume of 250,000, so it’s still a high-volume facility. Were there any take-aways from that project that offered pointers for mixed lines in the future?Yes. At the same time as the project in India, I was doing a project at Taubate in Brazil. The Brazilian market is much more gasoline-focused, but we took a lot of what we learned from Chennai and applied it to Taubate, and also the other way around. I think that’s one of the take-aways is how much cross-learning there is, as we have the common engines that we use across multiple sites around the world. And some of that flexibility that we put into India then was used as we developed the common engine assembly bill of process that has fed into our later programmes on 1.5-litre and 1.0-litre EcoBoost units.

Your current role is engine plant manager at Craiova. What engines are you currently building there?We build the one-litre, three-cylinder EcoBoost unit. We’re very proud of it. It’s the engine that’s won International Engine of the Year five times. It’s a really high-technology engine. I tell people I’m the plant manager in Romania and people think it’s kind of low-tech but, in actual fact, that couldn’t be further from the truth.

In terms of your role at the plant, what are your production responsibilities?As the manager for the engine plant, I am responsible for everything. I’ve got just under 1,100 employees here, hourly and salaried, and I effectively have profit and loss responsibility for the plant; safety, quality, production – everything here with regards to engine production is my responsibility.

The vehicle assembly side of Craiova has received some investment and it is getting a new model. Are you increasing production levels?Our production levels have increased in powertrain drastically. If we go back two years, the engine plant here was making about 100,000 engines a year. This year we’ll hit 300,000.

That’s a serious ramp up. How do you make the transition to that volume?We had installed capacity from our equipment to achieve those volumes. The big challenge was bringing in people and we have hired a lot of people. When you bring in new people, you obviously have to instil in them the same culture that you want, and that has been the biggest challenge here.But I think the workforce we have here is very positive, very professional and at the same time as going through this great hiring exercise, we’ve managed to improve our quality metrics by 30%. If you have the right processes in place and you empower people to follow the process, and to flag up abnormalities, then you’ll get the outcomes that you’re looking for. 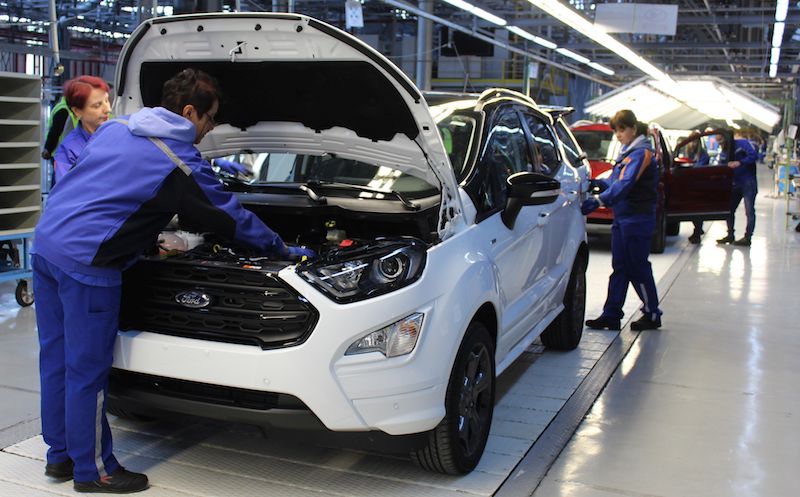 What are the challenges beyond staffing?Every day there’s a different challenge. Yes, sometimes it’s people issues, sometimes we might have equipment that goes down, or it could be external factors. One weekend we had a winter storm and half a metre of snow fell. That’s the great thing about manufacturing; every day is different. And my job is to really understand when I need to get involved in those issues, because I have to make sure that we make production every day.

A big part of my job is also looking to the future and addressing strategic issues of ‘how do we continue to improve quality’; ‘how do we continue to eliminate waste and really make step level changes in the plant?’I have to strike that balance between letting my managers deal with issues, but also supporting them when needed. For instance, we had a major piece of equipment fail recently and we didn’t have a spare in the plant, but because of my international connections, I spoke to some colleagues in the US, who I knew had similar equipment, and they had a spare. So, we air-freighted that from the US to here, got ourselves back into production and did it without impacting our vehicle plant. There’s a great camaraderie among the global Ford team which means we do help each other out.

In terms of investment in production operations at Craiova, have you made any big financial spend on equipment or processes lately?The 1.0-litre EcoBoost upgrade programme that we launched earlier this year was a major investment. As part of that we put in a new cylinder head assembly line, which is the new global flexible standard and gives us flexibility for the future. We invested a lot in the assembly line and in the cylinder block. One of the changes made was altering the intake and exhaust on this engine so it’s common with other engines within the Ford family.

We’ve seen a lot of development with cobots. Do you see that kind of technology improving powertrain manufacturing operations?Cobots are very topical at the moment. Everybody is looking and trying to understand how and where they can be applied, and we’re doing that here in Craiova. We have one already being trialled, it should go into full production in August, and we have a number of other projects in the pipeline to introduce additional cobots.

I think they have their place, although they’re obviously limited in terms of their payload, but they have capabilities that other robots don’t have, particularly in terms of their dexterity. A cobot can mesh gears whereas a standard robot, you’d have to put an awful lot of programming in to make it possible.