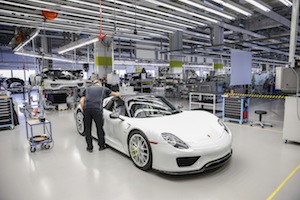 Germany – The final vehicle rolled off the assembly line at Stuttgart-Zuffenhausen according to schedule, says Porsche, after a production run of 21 months. The hybrid sports car has now reached its limited edition of 918 units.

Production development began in 2010, after the go-ahead from Porsche’s supervisory board, and the car was launched in late 2013. Its key technology is a drive concept which combines a high-performance combustion engine with two electric motors, enabling operation in five modes that accommodate a range of requirements from efficiency-orientated driving to maximum performance. Porsche says the 918 thus provides “important know-how for future production developments”.

Other innovative features include: a thermal management system with five separate cooling circuits, plus the hybrid cooling of the rear electric motor with air and water; intelligent control of generator functionality and conventional brakes, converting more kinetic energy to electrical energy; an all-carbon body; fully variable aerodynamics; and a rear-axle steering system.

The 918 has also influenced production strategies, prompting Porsche to apply for patents to cover innovations in assembly and quality assurance. Assembly was performed with wireless tools, such as battery-powered screwdrivers controlled via Bluetooth. The screwdrivers – silent in operation – increased flexibility for workers and ensured that, by means of a database, specified torques were performed and documented.

A highly adjustable assembly elevating truck was specially developed for finishing the two-seat monocoque, while a new type of scissors lift simplified installation of the 300-pound, high-voltage battery. Plus, the leather finishing and assembly tables are regarded by Porsche as a benchmark for ergonomics and flexibility, featuring changeable inserts for the production of different parts. This enabled maximum use of station cycle times and a high level of efficiency for 918 production.

In announcing the end of 918 production, Porsche highlighted a long list of previous models and their innovative features: the 904 Carrera GTS (steel and polymer body); the 959 (electronically controlled all-wheel drive system); the 911 GT1 (carbon fibre); the Carrera GT (CFRP monocoque and subframe). However, the manufacturer stated: “More so than any of its predecessors, the 918 Spyder is now providing a strong push for the advanced development of technologies for the sports cars of the future.”