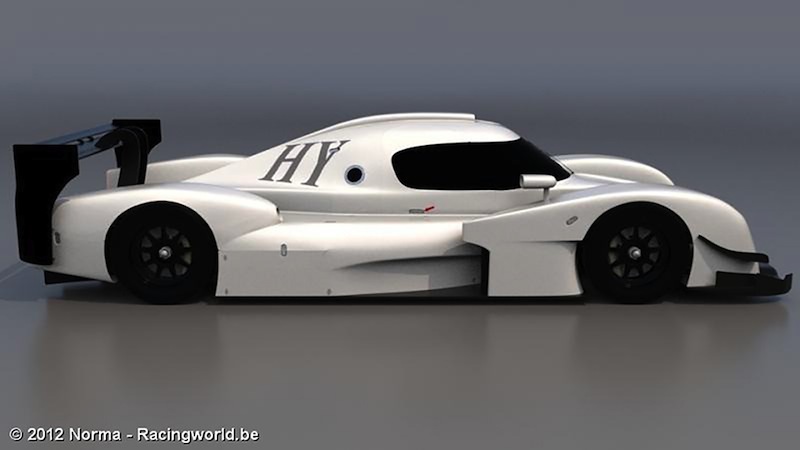 In as little as three years, automotive engine housings made of polymer materials will start to enter the market as volume production items. That is the prediction of Hendrik De Keyser, marketing and technology officer for polymer material supplier SBHPP, a unit of Sumitomo Bakelite Company. De Keyser’s prediction is made on the basis of a research project in which SBHPP has collaborated with German research organisation the Fraunhofer Institute to build and test a real engine in which the traditional metal cylinder housing was replaced with one fabricated from a glass fibre-reinforced phenolic composite material.

The project, he explains, aimed to visualise the possibilities for big parts made from polymer materials in a way that might excite the interest of carmakers. “We want to create a mindset change amongst OEMs” he states. According to De Keyser, the project showed that the experimental engine was able to perform as well as – and in some respects better than – its conventional counterpart.

The project was aimed at demonstrating the immediate application of the concepts involved and the subject engine chosen for the project was one that was well-established in the market: the single-cylinder, 650cc unit from Rotax that was used to power the BMW 650 GS motorcycle.

Making material choicesSubstituting a polymer composite material for metal in such an application immediately poses the question of whether to use a glass fibre- or carbon fibre-reinforced material, notes De Keyser; the former would be less expensive and the latter would be lighter in weight. But even if the glass fibre option is selected, there is a further choice to make between its use with a phenolic or epoxy polymer – the crucial factors being the superior mechanical and thermal resilience of phenolics. In this instance, both the technical and commercial considerations came out in favour of a glass fibre-reinforced phenolic. The proportion of glass fibre was 55%.

As De Keyser points out, replacing the standard aluminium cylinder housing with a phenolic composite alternative offers significant weight-saving potential. The phenolic material in this case had a density of just 1.7gm/cu.cm, whereas the corresponding figure for aluminium is 2.7gm/cu.cm. The total weight saving for the housing when using the phenolic composite instead of aluminium was in the order of 20%. The comparative saving would be even greater if the metal replaced was cast iron.

Although most of the previous aluminium structure was replaced by the phenolic composite, some metal elements had to be retained: inserts to provide extra robustness around highly loaded areas such as the stud bolts, and an aluminium liner for the cylinder to facilitate heat dispersion. The new housings were produced using a specially made but standard production specification mould. The cycle time, De Keyser adds, was less than two minutes, though he is confident that this could be further reduced if necessary.

Testing commercial viabilityEngines using the phenolic composite housings were put through a rigorous set of test routines by the Fraunhofer Institute in which their performance was compared directly with conventional aluminium counterparts. The results, says De Keyser, showed conclusively that a phenolic composite material could be a technically and commercially viable alternative to metal for the type of application involved. The testing included both full load – 30.6kW at 6,000rpm – and short durability routines, and in every instance the phenolic engines matched the performance of those with aluminium housings, with no leakage of oil or water.

In addition, states De Keyser, bench testing indicated that there were respects in which the performance of the phenolic engines was superior. Heat dispersion to the surrounding atmosphere, for instance, was faster, as was the initial warm-up time. Noise, vibration and harshness (NVH) levels were also cut; for example, the noise level reduction was 5dB.

Add all these together, De Keyser argues, and comparable engines in service should show superior emission levels, cold-start performance and lower corrosion levels, which in turn should provide for both longer service life and reduced maintenance requirements.

Exploring manufacturing advantagesThere should also be advantages when production processes are upscaled to mass-production levels. De Keyser points out that the tooling used in aluminium moulding processes undergo extreme heating and cooling cycles, and allied with the high wear that is intrinsic to the process, this means they can be expected to produce around 100,000 parts before being replaced. In contrast, the lower temperatures and pressures required to produce phenolic composite parts means that they should last for at least 300,000 parts and maybe as many as 500,000.

Moreover, moulded aluminium parts typically reach only about 60-70% of their final required geometry as a result of the moulding process itself, and so make considerable demands for subsequent machining – but for a similar part made with phenolic material that figure rises to 80-90%.

Techniques for environmentally efficient end-of-use disposal of phenolic materials are also now available. De Keyser says that SBHPP has developed a recycling process that uses supercritical fluid technology to completely restore the resins in the material to their base state. A pilot plant employing this technique is already running in Japan.

All this has made a case for greater adoption of such polymer-based materials for powertrains. De Keyser confirms that a project to make big parts for an automotive engine is now underway involving SBHPP and a major vehicle-maker, with a target to start production in 2018.

Pushing forward Polimotor 2There is potential to go much further and fabricate almost all other important constituent parts of an automotive engine from polymer materials; the water pump, oil pump, water inlet/outlet, throttle body and fuel rail, for instance. The idea is not fanciful – an attempt to construct a largely polymer automotive engine was made as far back as the 1980s in a project now known as Polimotor 1 to distinguish it from Polimotor 2, a new venture that aims to start fabricating parts in January 2016.

US-based engineer and innovator Matti Holtzberg is the driving force behind both projects and currently runs his own company, Composite Castings, based in West Palm Beach, Florida. Holtzberg says that, with recent advances in the field, the time is now right for a renewed attempt to build a polymer automotive engine.

Holtzberg says the engine will be a four-cylinder, double-overhead CAM and installed in a Norma M-20 concept car that will be raced in the US in the summer of this year. Holtzberg says ten units will be made initially, to allow interested OEMs to obtain one for their own inspection and validation. He says it is possible that variants may be built using different formulations of polymer materials in order to prove the potential of, for instance, glass fibre- or carbon fibre-reinforcements to provide a choice between low cost or low weight in the same applications. The basic purpose of the project, though, will be to demonstrate in the most practical manner that composites can replace metal in many different ways.

Considering core componentsThe core of the engine – the block, sump and cam box – will be made, says Holtzberg, from thermoset resin materials, most likely with carbon-fibre reinforcement, though the combustion chambers will necessarily be made of aluminium. A single material supplier will be chosen for those parts of the engine, though at the time of writing no name had yet been announced. However, much of the surrounding componentry and ancillary equipment will be made from thermoplastic materials provided exclusively by Belgium-based Solvay. 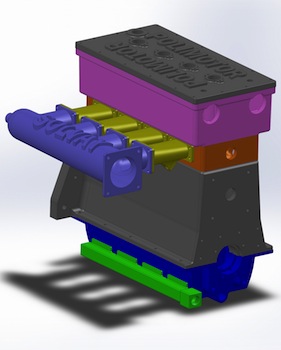 Solvay’s 30% carbon fibre-reinforced Torlon 7130 PAI (polyamide-imide) material will be used to make the engine’s cam sprockets. The Polimotor 2 engine will incorporate two four-inch diameter sprockets and one two-inch diameter sprocket in its valve-train drive system. Solvay’s own figures indicate that the units should be able to provide comparable mechanical properties to a similarly sized stainless steel cam sprocket weighing 2.4lbs (1kg), but with a 75% weight reduction.

According to Brian Baleno, global automotive business manager for Solvay Specialty Polymers, high-performance polymers are already a well-established feature of automotive powertrains. Nevertheless, he says this project should help demonstrate their feasibility in several areas in which mainstream manufacturers have so far been reticent about using them, for example throttle bodies and oil pumps. The bottom line is, he says, that there is “still a lot of metal that can be replaced”.

It is important to note that, although the project as a whole is a demonstrator aiming to push existing boundaries, the materials used will not be experimental formulations but commercially available products. However, Baleno says that some of the materials are still relatively new and hence represent advances in polymer technology that have occurred over the past five years. One of these will be the company’s AvaSpire product – an example of a formulation known as a polyaryletherketone (PAEK). It is a substance that Baleno describes as bridging the gap between the better known and established PPS and PEEK families of materials.

For Matti Holtzberg, the project is still very much a continuation of his previous efforts as well as a demonstration of new possibilities. This time, he is confident of producing a robust, viable engine that should, for example, be able to withstand the test of 24-hour racing at Le Mans. But there will still be genuinely innovative aspects to the use of polymer materials in the engine. One example, he promises, will be in the fabrication of the turbocharger, though he is not yet prepared to reveal full details. The engine block will also be significantly lighter and stronger than in the previous project.

Meanwhile, Brian Baleno offers a few more details about the specific applications of Solvay products. The turbocharger core housing will, he says, use a high heat grade of the company’s Amodel PPA material, which has been recently developed and can cope with continuous operation at temperatures up to 230°C. 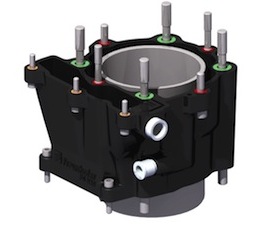 Future uses of polymers will not be limited to engine parts such as cylinders. Other possibilities include halfshafts

There will be innovations in fabrication techniques as well as material applications; Holtzberg and Baleno agree that this will involve additive manufacturing. Nor will new applications for polymer materials necessarily be confined to the engine. Holtzberg says there is a strong chance that the halfshafts linking the wheels to the gearbox could be made from a carbon-fibre composite. In what would be a very neat symmetry, he adds that the wheels may be produced from the same material as the engine block. Holtzberg makes it plain that he regards the whole vehicle, not just the engine and drivetrain, as a possible application for polymers.

Holtzberg clearly believes that the current business context is far more conducive to the possible take-up of the project’s applications by mainstream OEMs. These developments fit with the trend for reducing carbon emissions through weight saving. The Polimotor 2 engine is projected to weigh about 90lbs, or roughly 40% less than a standard production engine of today. The future, he comments, is likely to see increased use of smaller, lighter, turbocharged engines, and the interest that he says the project is already receiving from the OEMs vindicates his belief that Polymotor 2 will prove of fundamental significance in shaping that future.