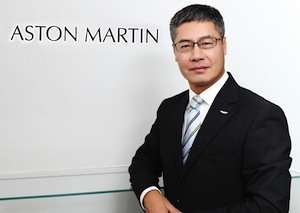 China – Moving from Porsche China, where he served for six years as director of sales and most recently director of PR and press, Michael Peng will assume operational responsibility for all aspects of business at Aston Martin Lagonda China.

Peng has 22 years of automotive industry experience, beginning with management positions at BMW after he achieved post-graduate qualifications in Germany. One of his roles at the German OEM involved looking after its Asian business. Peng will take up his new responsibilities at Aston Martin on February 1, 2015, following the recent retirement of Jenny Zheng.

The appointment of Peng comes after several other senior management moves at Aston Martin, including that of Andy Palmer to the position of CEO in October last year.