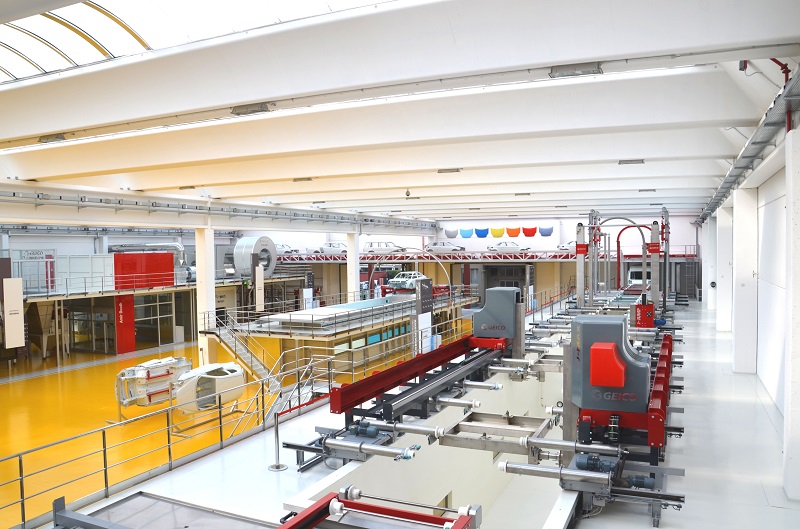 Fiat has enjoyed a long and rewarding association with Brazil since opening its first plant in Betim in 1973. So when a new facility was needed for Jeep Renegade production, the company looked again to the South American country. Fiat then became the first automaker in Brazil to establish manufacturing activities outside the industrial belt of São Paulo.

The new plant, located in Pernambuco, in the north-east of the country, was designed to be flexible so it could be adapted for production of several different, as yet unspecified, future models. It also has a unique layout designed to enable rapid decision-making and efficient sharing of know-how and best practice between production areas. The communication centre, which includes a metrology lab and a simulation room, forms the central hub of the plant. All vehicles pass through here after each major production phase.

The operational design of the plant draws on Geico’s extensive experience of world-class manufacturing, which is recognised as one of the most advanced in the world.

Paintshop partner
Pernambuco will be Fiat’s greenest plant. It will adopt the most forward-thinking processes and logistics, which will make it highly efficient and minimise its impact on the environment. Examples of this include the high-efficiency bodyshop robots made by Comau and the decision to use a compact paint booth design that requires less space and helps to reduce emissions.

When it came to choosing a partner for the paintshop in Pernambuco, Geico was the logical choice. Geico is in fact a leader in the Brazilian market and has been involved in four major projects in the country since 2000: the 25 jobs-per-hour (jph) Mitsubishi factory in 2014; the 60jph Renault-Nissan facility in 2013, followed by a van and pick-up site in 2002 and the 25jph PSA factory in 2012.

The new plant will cover an area of 4.4m sq. m and will have a final annual production of 310,000 cars. It has required the investment of some 3 billion reais (approximately Ä1.3bn) and will produce new car models developed in Brazil for the Brazilian and Latin American market.

Geico is very proud to be part of this Italian adventure in a country where, over the years, both Fiat and Geico have been significant players. Innovative technologies around eco-sustainability and energy saving – developed by its team of engineers at Pardis Innovation Centre – have been adopted in the development of this paintshop. These technologies include an innovative one-floor layout housing Primerless, Hydrospin plus and Air Supply Unit (ASU) control with automatic six-zone systems.

It took Geico nine months, from December 2013 to September 2014, to complete the project, and it is now ready for the commissioning phase. Such has been the success of the project that Fiat has already given the green light to double the capacity of the paintshop from the original 30jph layout to 60jph.

Trends in paintshops
There is no doubt that paintshops are going green – that much is apparent from recent installations around the globe. Geico’s vision for the future is a paintshop with zero wastewater and zero carbon emissions by 2020. The self-sufficient paintshop forms part Geico’s green agenda toward June 16, 2020 – a date that it has been dubbed Energy Independence Day.

Innovation is central to the Geico model and the company has invested Ä12m in research over the past year. The new Pardis Innovation Centre opened in 2013 and is Geico’s R&D facility dedicated to testing and prototyping green paint processes. Indeed, its primary goal is to test new technologies developed by Geico’s advanced engineering teams in order to match the growing demand from vehicle manufacturers for innovation. Besides serving as a benchmark for research and development, Geico has designed the centre so that clients can visit in order to experience and test the company’s new technologies. These cover the most important phases of the paint process: tanks for pre-treatment and cataphoresis, automated sealing lines, booths for liquid and powder paints, drying ovens, conveyors and systems for handling car bodies.

At the moment, Pardis is playing host to a selection of Geico’s most innovative products already adopted by its customers such as J-Jump, J-Flex, J-Max, LeanDip, Amir booth, Hydrospin plus, Dryspin and the Dryflex oven.

Planning for Pernambuco
Right from the start, what captured Fiat’s attention was Geico’s ability to come up with designs for a single-floor paintshop. This approach brought with it significant savings on the upfront investment cost of the building, and it could be seen as Geico’s trump card against its competitors.

The paintshop sits within the vast plant and is relatively compact. It measures just 400 metres by 80 metres, with a ceiling height of 23 metres. The plant is designed to treat various body sizes up to five metres in length, two metres wide and with a height of 1.8 metres. Geico originally planned to start with a 30jph layout, but built in sufficient capacity to allow a future doubling of throughput within the existing structure. As is now clear, this is indeed what Fiat has committed to do. This expansion will increase the plant’s annual production to 310,000 bodies. 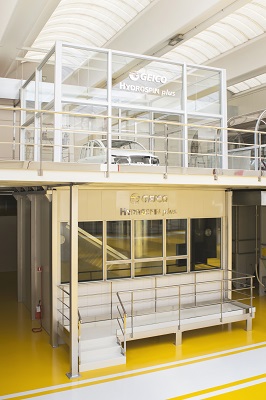 The plant boasts many technological innovations, which start with the painting system itself – Geico’s primerless system. This process eliminates the primer layer and replaces it with a thicker base coat that is then followed by a wet-on-wet application of a clear coat. This delivers obvious energy and environmental benefits, not least of which is the fact that a primer oven is no longer required.

When it comes to cleaning the air from the paint booths, Geico has gone with Hydrospin plus technology, which has a long and successful track record in this field. Drysys developed the first system to use this technology, and over the past 50 years it has undergone several modifications and changes – first by Haden, then by Geico. Today, as far as both technical performance and ease of maintenance are concerned, Hydrospin plus is a state-of-the-art wet scrubber.

Turning to incineration, Geico has implemented a technology known as Integrated Thermal Oxidixer (ITO). Here the incinerator is no longer located outside the building, but on the oven itself. Both recuperative and regenerative thermal oxidisers are integrated with a heat recovery circuit in the incinerator to ensure that there are no harmful emissions.

The system also features ASU control with an automatic six-zone system, which allows the consumption rates of the booth to be notably reduced. It features a paint application window with variable set-points according to weather conditions. This is required because the setting systems must be very accurate to ensure an effective control. A bespoke software package, together with set-point variation during the transition, cleaning and production standstill time periods, delivers valuable reduction of energy consumption.

Looking ahead
Geico’s corporate philosophy is based on innovation from both a cultural and an engineering perspective. This approach allows the company to meet and exceed its customers’ critical expectations. For example, Geico’s virtual reality technology allows its clients to validate a plant design in the Interactive Engineering Laboratory at the Pardis Centre before a single brick is laid. This approach also allows them to study and analyse a project during the engineering phase.

It is clear that environmental concerns will continue to drive trends in the paintshop of the future, which will in turn lead to a shift toward water-based paints and other advanced technological solutions such as nanotechnology. There is also pressure to simplify further the paint process with technologies such as primerless and dry scrubbers. Geico also expects to see more demand for different handling systems in order to give customers optimum levels of flexibility both in terms of production and ownership costs. Finally, the focus will sharpen on productivity improvements, which will put pressure on suppliers to develop innovative atomisers and robot arms.

Today’s global marketplace makes it difficult to differentiate between the change demanded by customers in emerging regions and those coming from established producers. Indeed, this has been the clear lesson that Geico has drawn from the Pernambuco project. It is difficult to distinguish the challenges faced by emerging and advanced countries. Every Geico customer demands a paintshop solution that has lower investment costs but produces higher-quality results. This is possible thanks to Geico’s flexibility and innovative solutions.