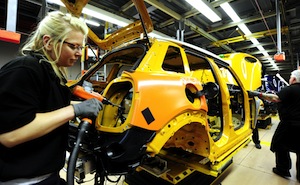 UK – Production of the new model comes on the back of a £750m investment by BMW in its UK facilities between 2011 and 2015, and follows the launch of the Mini Hatch in November last year. The new five-door version will go on sale this autumn.

The five-door Hatch is the second member of the Mini family to be built on a new platform, increasing the flexibility of the body manufacturing processes and enabling the efficient production of mixed models. Its maker says this is “an essential element of the Mini’s build-to-order appeal”.

Frank Bachmann, managing director of Mini Plants Oxford and Swindon, said: “BMW Group has invested in creating state-of-the-art technology and facilities at Oxford and Swindon for the launch of this new generation of Mini, demonstrating the company’s commitment to a long-term future for its UK production sites.”

At Oxford, preparations included: the construction of a  bodyshop; new body side tooling; extra equipment for wax sealing in the paintshop to accommodate the extra door and differences in rear geometry; and training for assembly employees. Swindon required additional roof and panel tooling in the press shop and rear door cells in the sub-assembly line. The latest Mini will also see the introduction of new paint colours, plus the return of ‘Electric Blue’.