With relatively low car ownership, Russia offers great potential for global OEMs – but its potential is threatened by economic and political volatility, a shaky supply base and logistical difficulties 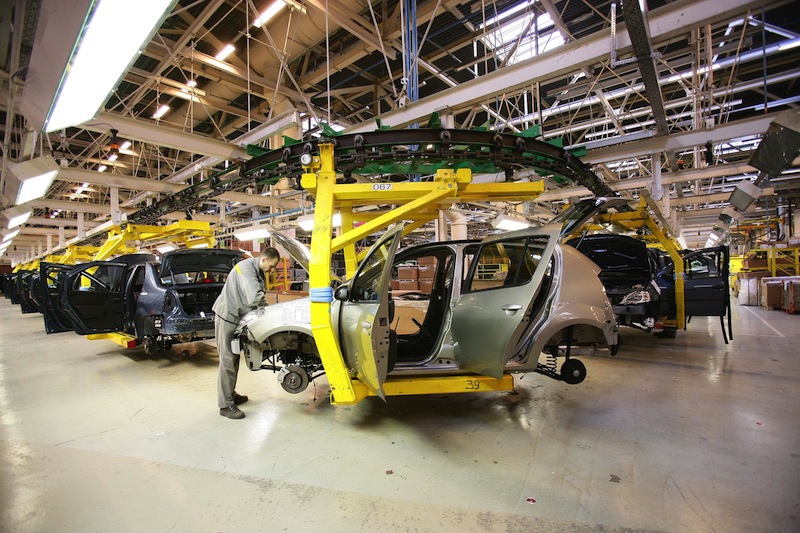 Russia’s car industry is back in the spotlight as automakers react to a financial wobble in the country which has been precipitated by President Vladimir Putin’s annexation of Crimea in March. The fallout has further depressed car sales that had already been declining from 2012’s record year, although the raw numbers are still large. According to the Association of European Businesses, sales of cars and light commercial vehicles (LCVs) in Russia hit 2.75m in 2013, putting it second only to Germany in the European market.

The numbers are expected to rise in the long term. A report last year by financial analysts The Boston Consulting Group (BCG) estimated that sales in the country could hit 4.4m cars and LCVs in 2020, up from 2.9m in 2012.

These figures combined with government incentives are luring more manufacturers to build in Russia. In the first three months of this year, all of the top-ten bestselling cars were built in the country, and last year production hit 1.9m cars and 255,000 CVs. Investment is definitely on the up. BCG estimated that since 2011 the total cash pledged by Ford, GM, BMW, Hyundai/Kia, Mazda, PSA Peugeot Citroën, Mitsubishi, Renault-Nissan, Toyota, and Volkswagen will hit $10 billion by 2020. In two years' time, capacity will reach 3.3m, according to BCG.

This is assuming that plans come to fruition. The falling value of the rouble has already hit carmakers, with reports in early April that Ford is cutting 950 jobs at the two factories it runs in partnership with local firm Sollers. Meanwhile, the maker of the bestselling Lada brand, AvtoVAZ, earlier this year reported a 7.9 billion rouble ($222m) loss in 2013 and a drop in sales again this year.

This downturn is not only affecting predictions for sales in 2014 but is likely to have a knock-on effect. “We’re certainly not expecting car sales to bounce back quickly,” says Carol Thomas, Eastern Europe analyst for LMC Automotive. “The medium-term economic outlook has deteriorated over the last few months as well, and so prospects for 2015 are also looking weaker now.” 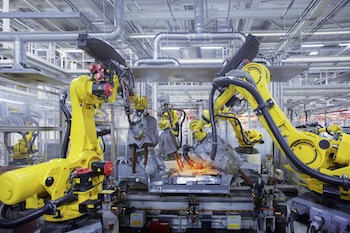 Russia is well known for its economic volatility, and it suffered the most of all the major carmaking nations after the 2008 global financial crisis, with production down a massive 60% in 2009. However, it bounced back equally quickly.

Major local producer Volkswagen asserts that the current crisis has not affected its plans to open a new engine factory in 2015 next to its Kaluga production plant. “I believe we should not scale back our activities [in Russia] because of this,” CEO Martin Winterkorn told Reuters in April. VW is promising further investment at this location totalling $1.2 billion to the end of 2018.

It has also been reported that Mercedes is actively looking to build cars in Russia and will join its rival BMW, which currently builds cars from kits at Kaliningrad.

As with fellow BRIC countries Brazil and China, Russia has plenty of financial sweeteners in place to persuade companies to relocate and to source local parts once established. Under the complex Decree 166 law, carmakers which build over 300,000 units a year and promise to push local content to around 60% in value are entitled to tax benefits, including cheaper imports of parts.

Russia’s recent accession to the World Trade Organization (WTO) has obliged it to reduce import duties, and this gradually occurring, but there is also a controversial end-of-life scrappage charge on imported new vehicles which effectively serves as an import duty.

Up until the end of last year, local makers were given further incentives in the form of preferential loan rates to buyers of new cars under a certain value, a scheme that the Russian government said in January would continue for three more years.

Taking all this into account, manufacturers are pressing ahead with investment. The biggest player is Renault-Nissan, which (as Renault) paid $1 billion for 25% of AvtoVAZ in 2008, and another $742m in 2012 that will take its share to just over 50% in June this year. This has given Renault access to the 350,000-capacity Soviet-era Togliatti plant, on top of the OEM’s Avtoframos facility in the capital. 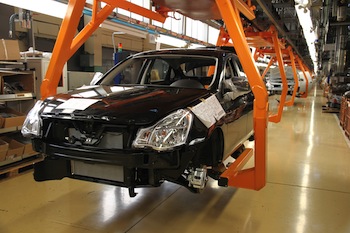 Renault rules in Russia
A reworking of Togliatti in 2012 to build cars on Renault’s ubiquitous B0 platform, which is the basis for much of the Dacia range elsewhere, has seen the plant producing the new, Russia-specific Nissan Almera saloon, as well as the Dacia-based Lada Largus. Also coming to Togliatti this summer are new models sold under the relaunched Datsun brand, including the on-Do saloon.

As a result, Renault has a stranglehold on the market. The top-selling Lada sells almost double its nearest rival, which just happens to be Renault – thanks in part to the rebadged Dacia Duster, the country’s fourth bestselling car and its bestselling SUV. Together with Nissan, the three have a market share of 31%, based on first quarter figures this year. The next biggest car company, VW, has 11%.

Despite this dominance, AvtoVAZ is in trouble, losing 7.9 billion roubles last year after recording a profit in 2012. The man in charge of overcoming that deficit is newly hired CEO Bo Andersson, who made a name for himself by turning around another Soviet automotive relic, GAZ Group.

In February this year, Andersson issued a statement on his plans for reversing AvtoVAZ’s fortune, including negotiating lower prices on parts and “changing the workers’ headcount”, although without making redundancies.

It looks to be a repeat of his work at GAZ, which is based in Nizhny Novgorod. When he arrived at the former maker of Volga cars in 2009, it was drowning under debts of $125 billion owing to a combination of the financial crash and unwise investment in Britain’s LDV vans, as well as development of a new car dubbed the Volga Siber. Andersson canned the car, focused on improving the quality of the aging GAZelle light van and reduced the bloated workforce by around 50,000. In 2011, GAZ then reported a profit.

One reason for the turnaround was that GAZ used its vast 300-hectare factory, complete with internal rail network, to start building vehicles for other manufacturers. The Russian automotive industry is similar to China in that makers often pair up with local companies; however, in Russia this is not because of regulations but ease of operation.

Seeking solace in Sollers
In 2011, Ford paired with Sollers in a 50:50 partnership after building cars by itself at St Petersburg from 2002. This move added another two factories to Ford’s portfolio, allowing it to expand capacity and tap into the growing SUV market with upcoming models such as the small EcoSport and the large Edge, along with the Explorer SUV which is already in production. 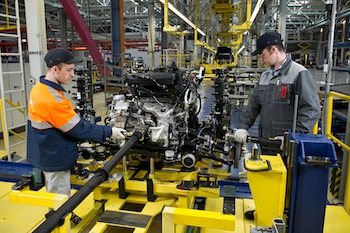 Also working with Sollers is Mazda, in a partnership to build the CX-5 SUV in kit form in Vladivostok on the east coast. At the opposite geographic extreme, in the western Kalingrad region, contract maker Avtotor is building cars from kits for BMW, Kia, Opel and Cadillac. The company announced in 2012 that it will team up with parts giant Magna to establish six new assembly operations and up to 15 component plants to take its capacity to 250,000 vehicles a year. Meanwhile, on the border with Ukraine, near Rostov, TagAz builds cars for Hyundai as well as for a several Chinese brands.

Meanwhile, last year GAZ started building the B-segment Chevrolet Aveo, after setting facilities to build the Skoda Yeti in 2012. In addition, it makes the Skoda Octavia and VW Jetta, with a capacity of 100,000 for these Volkswagen brands. GAZ has also begun making Mercedes Sprinter vans for Daimler."In Russia, it’s not easy to build: to get the approval to build, to get the land, to get the water, to get the electricity." – Bo Andersson, AvtoVAZ

According to Andersson, the advantage of going to a contract maker is the convenience. “I’d say it was 50% not having to invest and 50% having someone else manage the hard issues in Russia,” he told AMS back in 2012. He singled out corruption and bureaucracy as two stumbling blocks. “In Russia, it’s not easy to build: to get the approval to build, to get the land, to get the water, to get the electricity. You don’t build very much in two years,” he said. “When I was at GM we built a plant in St Petersburg, and for this zero-tolerance company it took us three times as long and it cost us three times as much to build the same sort of plant in Mexico and India.”

Russia’s other big problem for automakers is the lack of a strong local supplier base compared to other up-and-coming manufacturing countries such as Mexico and Brazil. “From my point of view, I’d say the existing Russia supply base is not at the right level,” said BCG analyst Nikolaus Lang to AMS at the end of last year. The difficulty stems from a lack of sophistication among local suppliers and a shortage of international players, he believes. “The large majority of Russian suppliers are not at the right level to supply at western OEMs or even joint ventures,” he said. He estimated that the local content per car averages around 25%.

Sourcing supplies
However, there are signs that the situation is changing. In September last year, Renault-Nissan and AvtoVAZ announced the establishment of a common purchasing organisation in Russia. The objective was to increase savings by boosting volume through the four brands (including Datsun and Lada). The size of the orders was predicted to attract global players, as well as to “help upgrade the technology and quality of Russian suppliers”, said Renault-Nissan in a statement.

The strategy looks to be working. In January, UK-based driveshaft supplier GKN Driveline announced that it would build its first factory in Russia, in Togliatti. The 5,000m plant is expected to open in 2015, when it will produce constant velocity jointed sideshafts. 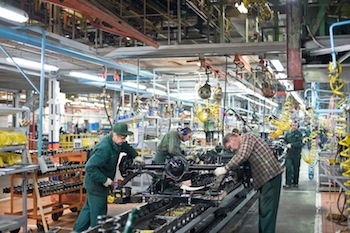 But aside from VW and Nissan-Renault, Lang at BCG does not expect any other manufacturer to introduce an engine plant, despite the effect it would have of increasing the content level past the 60% needed to qualify for import reductions. “If I have sales of 1m in a market, I can afford an engine plant; with 200-300,000, it’s much more difficult,” he says.

Logistics are another cost factor in a vast country where roads are poorly maintained or non-existent and factories are widely separated from the two big sales bases of St Petersburg and Moscow, having been established by a highly centralised Soviet government for reasons unrelated to market suitability.

Makers are also having to adapt to changing tastes in car-buying, with traditional mid-priced hatches and saloons falling out of favour as SUVs at the higher end and budget cars at the lower end squeeze the middle. Ford especially is experiencing a tough time, with sales of its Focus halving in the first quarter of this year compared to the same period in 2013. Opel’s Astra is also down by 11%. Meanwhile, sales of the four biggest Chinese OEMs – Chery, Geely, Lifan and Great Wall – totalled just over 18,000, more than the figure Ford managed in the same period.

The potential for growth in car sales in Russia is huge, given that car ownership levels are around half that of Western Europe. But as the knock-on effects of the Ukraine crisis have shown, the road to growth will be as rocky as much of the country’s tarmac.