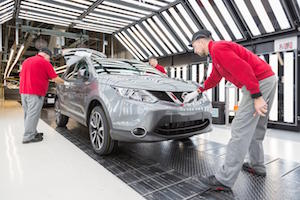 UK – The vehicle-maker made 507,430 units at its Sunderland factory in 2016, its 30th year in the country. The total included record volumes for the Leaf electric vehicle (EV) and the second-generation Qashqai, with the original now made on both lines for the first time.

“Since the birth of our factory three decades ago, north-east England has become one of the major international automotive centres,” said Kevin Fitzpatrick, divisional vice-president, European Manufacturing, Nissan. “Britain is now home to Nissan’s bestselling and most technologically-advanced models in Europe, covering our market-leading crossover range, the world’s bestselling electric vehicle and two premium models for global export.”

Key developments in 2016 included production of the Infiniti QX30 for global markets, the first time that vehicles have been exported from Sunderland to the US and China. The plant also installed 19,000 solar panels which, along with ten existing wind turbines, bring the renewable energy contribution to 7% of total requirements.

The factory is undergoing further improvements, such as the installation of a £37m ($46.4m) extra-large press line which is due to start operations in the next few weeks. As announced in 2016, the OEM is also investing £22m in capacity expansion for the Qashqai plus £26.5m for production of a future generation of EV batteries. According to Nissan, £650m of ongoing investment, supported by government grants, will bring the total since the launch of the plant in 1986 to more than £4 billion.

The vehicle-maker is expecting a significant milestone in 2017, with cumulative production in the UK now approaching 9m. Sunderland will also see the introduction of a refreshed Qashqai and Autonomous Drive technology. The factory will eventually produce three next-generation crossover models: the future Juke and Qashaqai plus the X-Trail.

Across its four sites in the UK – the Sunderland plant, the design studio in London, the technical centre at Cranfield and the sales and marketing operation at Maple Cross – Nissan now employs over 8,000 people. The OEM’s UK supply chain and dealer network account for another 28,000 and 4,000 jobs respectively, bringing the total to around 40,000.