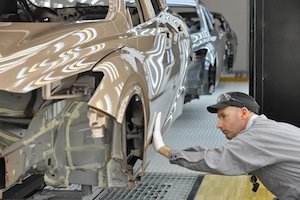 UK – The manufacturing launch follows a £250m ($375m) investment in almost 40,000 sq.m of new facilities at the plant, including a fully automated bodyshop. The workforce has also been expanded by 300 personnel, including master craftspeople.

The Q30 is Infiniti’s first compact model and its first vehicle to be manufactured in Europe. The brand is now making cars in five plants in four countries and on three continents as part of its global growth plan. Nissan says that its UK site was chosen for the Q30 in 2012 “in recognition of the outstanding quality standards reached by the workforce in Sunderland over many years”.

Trevor Mann, chief performance officer, Nissan Motor Corporation, commented: “Q30 production is further strengthening our premium-vehicle manufacturing capability in Sunderland, and exports to global markets such as China and North America signal the next phase in the expansion of Infiniti and a new chapter for our UK plant.”

The investment at Sunderland for the Q30, which was supported by £9.2m from the UK Government’s Regional Growth Fund, included the construction of a 25,000 sq.m bodyshop, equipped with 134 robots for precision laser welding, and an extra 14,500 sq.m in final assembly. The Q30s are customised in the trim and chassis shop, where 1,191 tasks are completed for each model.