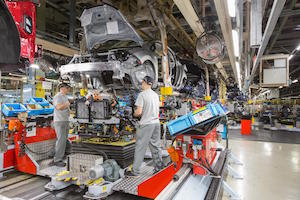 The Tekna-grade Leaf will be shipped to France. Nissan’s Sunderland plant exports the model to 23 other counties, covering western Europe but also markets such as Argentina, Iceland, Israel and Taiwan.

Nissan Leaf and battery production began in the UK in 2013 and currently supports 2,000 jobs at the OEM and its suppliers. In January this year, Nissan announced an investment of £26.5m ($38.2m) at its lithium-ion facility, where 300 personnel are engaged in engineering, manufacturing and maintenance. The Sunderland plant had already received a total of £420m for Leaf and battery production. Also this year, Nissan launched a 30kWh Leaf in Europe which has a range of 250km – 25% more than the previous version.

In total, the Leaf has achieved worldwide sales of 220,000. Nissan introduced a second EV to the European market in 2014, after its Barcelona plant in Spain started making the e-NV200 van, which is powered by the same lithium-ion batteries.