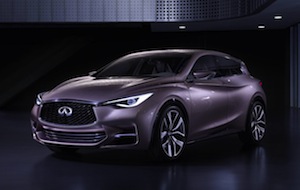 UK – The workforce at the OEM’s plant in the north of the country is growing by 300 individuals, more than the 180 originally announced in 2012 following the allocation of the Infiniti model. The factory has already been extended by 25,000 sq.m at a cost of £250m ($388m), incorporating a new bodyshop plus expanded trim and chassis assembly.

The new recruits will join the company ahead of the start of Q30 production later this year, which Nissan says will be “closely followed” by a second Infiniti model, the new QX30 premium compact crossover. The two models will be the first premium models manufactured at Sunderland, and will be exported to North America and China.

Colin Lawther, senior vice-president for Manufacturing, Purchasing and Supply Chain Management in Europe, said: “Infiniti production heralds the beginning of a new era for our operations in the UK, and the demands of premium vehicle manufacturing require significant additions to the team.”

The expansion for the Q30 will take Nissan Sunderland’s workforce to slightly under 6,800, supporting a further 28,000 jobs in the UK automotive supply chain.