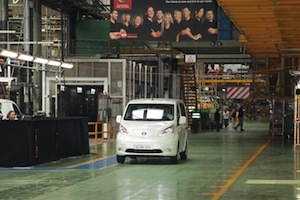 Spain – The Barcelona plant will be the global production site for the model, which is the OEM’s second all-electric vehicle after the LEAF. The e-NV200 will be available as a passenger vehicle, light commercial vehicle (LCV) and taxi. Exports to 20 international markets including Japan will begin in June, while the city of Barcelona will introduce the model to its taxi fleets in order to cut emissions.

Andy Palmer, chief planning officer at Nissan, hailed it as a “great landmark day” for the company, claiming that electric vehicles (EVs) are “now recognised as mainstream technology”. He added that while many manufacturers are “only just starting to launch their first EV…  Nissan has clear first mover advantage”.

The launch of the e-NV200 at Barcelona has seen Nissan pouring €100m into the plant as part of a wider investment of €431m in its Spanish operations.