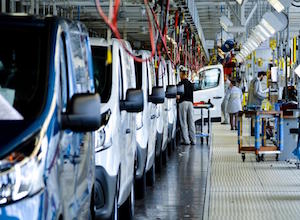 France – The next-generation light commercial vehicle will be made at the Renault plant in the north-west of the country, following a three-year upgrade which cost €230m ($252m). NV300 production will raise the factory’s output by 100,000 units between 2016 and 2026.

“The production of the Nissan NV300 at the Sandouville plant is a win-win for Renault and for Nissan,” said Carlos Ghosn, CEO of Renault. “We maximise Renault manufacturing expertise and Nissan gets a top-quality production site in the heart of the European market.” The NV300 will be assembled on the same line as the new Renault Trafic, while the engines for both models will be made at Renault Cléon.

The Sandouville factory made 93,000 Trafics last year and currently produces over 460 vans per day for Renault and its partners. It makes a version of the Vivaro for Opel and Vauxhall, and will soon begin producing the next-generation Fiat mid-size van. The workforce at Sandouville will grow by 183 individuals.

Nissan and Renault are also developing a one-tonne pick-up for Renault which will share some architectural features with the NP300.