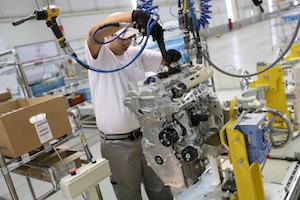 Brazil – The new site, which has been established at a cost of $1.5 billion, will produce Platform V vehicles and engines, beginning with the Nissan March and 1.6 16V flexfuel engine. The annual production capacity will be 200,000 vehicles and the same volume of engines.

The 220,000 sq. m complex, which sits on over 3m sq. m of land in the state of Rio de Janeiro, encompasses all aspects of automotive production, from stamping through to vehicle assembly and road testing. The plant has been constructed according to sustainability principles, incorporating natural light and ventilation, recycling and a three-wet, waterborne paint process.

There is also a supplier park with four parts suppliers, in addition to two operating inside the plant. The suppliers are: Tachi-S (seats); Yorozu (suspensions); Kinugawa (rubber seals); Calsonic Kansei (cockpit components); Mitsui Steel (plates); and Sanoh (brakes and fuel pipes). Nissan aims to achieve 80% local content in Resende by 2016.

Around 1,500 personnel are already employed at the site, but the number is expected to increase to 2,000. Nissan says that all workers have received special training and that more than 300 have trained for three months at its plants in Japan, Mexico, the US and the UK. The quality control team received six months’ training in Japan and Mexico. The new plant is also using 88 robots for tasks which require greater precision or incur safety and ergonomic risks.

François Dossa, president of Nissan Brazil, said the complex launches “a new phase of growth in the country” and will help the OEM “to deliver more quality, and more technological and up-to-date products”.

Carlos Ghosn, chairman and CEO of Nissan, described Resende as “fundamental” to achieving growth targets in Brazil, where the company hopes to gain a 5% market share by 2016.