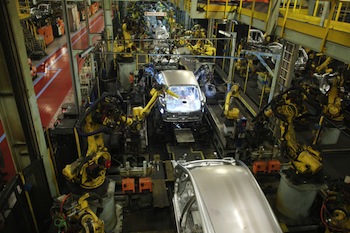 Europe – The investment (equivalent to $2.8bn) will support the launch of 14 new models in 2014 and boost production to record levels, according to the OEM’s chief planning officer and executive vice-president, Andy Palmer.

Nissan built 675,077 vehicles in Europe last year, more than half a million at its Sunderland plant in the UK. The 24-hour facility launched the LEAF, plus the new Note and Qashqai. It also produces the Juke and battery cells for the electric LEAF and e-NV200 light commercial vehicle.

The vehicle-maker says that its Spanish and Russian operations will now lead the way. Nissan Barcelona is preparing to produce the e-NV200, the new C-segment hatchback and the One Ton pick-up. The annual output at the site will be 200,000 vehicles. Meanwhile, Avila recently started manufacturing the new NT500 light truck. Nissan has also invested in Cantabria to enable its machining plant to produce brake discs and steering knuckles for models such as the Qashqai, Note and LEAF. The OEM’s investment in Spain amounts to €430m.

In Russia, Nissan is preparing to launch the Datsun brand with two new models at the same time as increasing production of the Almera at Togliatti, the AVTOVAZ Alliance facility. The OEM is introducing a new production line at Togliatti at a cost of €60m, while also investing €167m to double capacity at St Petersburg. The latter will start manufacturing the new Qashqai in 2015, plus another model which has yet to be announced.

Colin Lawther, Nissan’s senior vice-president, Manufacturing, commented: “The success of Nissan as a global company is helped by local production, which is vital to ensure our products meet the needs of our customers.” Last year, 80% of Nissan vehicles sold in Europe were built within the region.