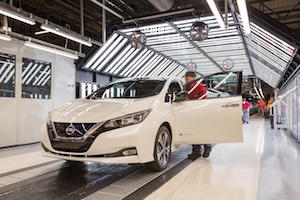 Japan – The total has been reached 84 years after the company was founded; it took 73 years to make the first 100m but only 11 years to turn out the next 50m, following the increased expansion of the OEM’s production network beyond Japan. The majority of its vehicles are now manufactured overseas.

Nissan reached the 100m-unit milestone in 2006, with 76.5% of these vehicles made in Japan. Accelerated localisation has meant that 76.5% of the 50m produced in the last 11 years were made outside Japan, including 13% in Europe.

The milestone comes as Nissan prepares to launch the new Leaf in Europe. Trial production is currently underway at its Sunderland plant in the UK, which was established more than 30 years ago. Nissan’s total production in the UK has now surpassed 9m vehicles.

Elsewhere in Europe, Nissan has vehicle plants at St Petersburg, Russia, which was established ten years ago, and at Barcelona and Avila in Spain, where production began more than 30 years ago. Nissan’s total output in Europe has exceeded 13m units.

In Japan, Nissan has vehicle plants at Tochigi, Kyushu and Oppama. Other production facilities are located in the Americas, the Asia-Pacific and Africa.