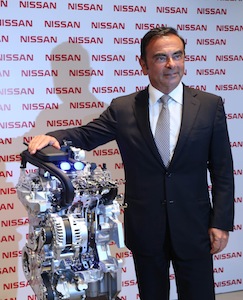 Brazil – The new engine will share the assembly line with the 1.6-litre unit which has been made at the Rio de Janeiro industrial complex since the start of operations in April 2014. The addition of the three-cylinder, 1.0-litre engine will require a 100m reais ($36m) investment.

Delivering 76hp and 98Nm of torque on gas or ethanol, the engine will equip the new Versa sedan which will soon be assembled on the same line as the new March and March Active. Nissan claims the engine will have one of the best energy efficiency ratings in Brazil, courtesy of its aluminium block, four valves per cylinder and “high-end” technological features.

“The production of a new three-cylinder engine in Brazil demonstrates that Nissan is determined to boost its presence in the domestic market, with modern, innovative products made locally,” commented Carlos Ghosn, president and CEO of Nissan Motor. “Therefore, we increased the local content ratio of our products in order to further competitiveness.”

The Resende complex, which has already required a 2.6 billion reais investment, boasts a full range of capabilities: stamping, bodyshop, paintshop, plastic injection moulding and painting, assembly, powertrain, quality inspection and test tracks. It makes the OEM’s Platform V products, with the capacity for 200,000 cars and the same number of engines per year.

The 1,500 workforce, including 200 in powertrain, has been increased by 25 personnel for assembly of the new engine.