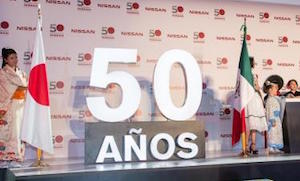 Mexico – The plant at Jiutepec in Morelos State was the company’s first outside Japan. Nissan said that, as well as launching its global strategy, CIVAC “established the beginning of a longstanding tradition in innovation, research, commitment and the highest quality standards in vehicle manufacturing”.

José Muñoz, executive vice-president, Nissan Motor and chairman, Nissan North America, commented that Nissan Mexico’s production records “wouldn’t be possible without the sum of CIVAC Plant’s capacity, which adds to the extraordinary work delivered by Aguascalientes A1 and A2”.

He continued: “Nissan Mexico completed an all-time record number in the automotive industry by achieving an annual output of almost 830,000 manufactured vehicles in 2015 fiscal year. Once our new manufacturing complex in Aguascalientes, COMPAS, starts operations, we will be in the position to produce 1m units before the end of this decade.”