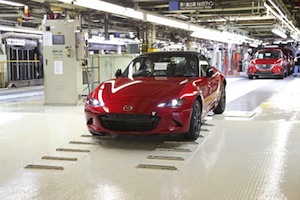 Japan – The first units of the two-seater sports car being made at Ujina Plant No.1 in Hiroshima are destined for the domestic market, where it is known as the Mazda Roadster. Japanese sales will begin in June this year, after which the model will be rolled out to overseas markets.

The fourth-generation MX-5 was developed under the motto ‘innovate in order to preserve’, in response to increasing safety and environmental demands. It features SkyActiv technology and KODO – Soul of Motion design.

According to the OEM, the MX-5 represents Mazda’s ‘vehicle engineering philosophy’, based on ‘the pursuit of driving pleasure’. The model holds a Guinness World Record as the globally bestselling two-seater sports vehicle; over 950,000 have been manufactured.