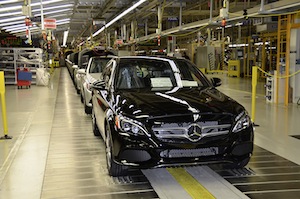 US – The plant in Alabama has become the third location in the global production network, after Bremen in Germany and East London in South Africa; a fourth location in Beijing, China, will be added shortly. At Tuscaloosa, the C-Class joins an existing production programme of SUV models: the M, R and GL-Class.

Jason Hoff, head of the Mercedes-Benz Tuscaloosa plant, commented: “Many of our team members have spent weeks and months in Germany getting to know the C-Class and the technologies associated with this product.” Bremen is the lead plant in the production network, co-ordinating everything from tooling strategy to training and production quality. More than 100 personnel travelled from Tuscaloosa for training in Bremen.

Hoff described the plant as now being “optimally prepared to write the next chapters of our success story, ‘Made by Mercedes-Benz in Alabama’”.

The US and Canadian market launch for the C-Class is scheduled for this autumn.