Mercedes-Benz to build plant in Jawor 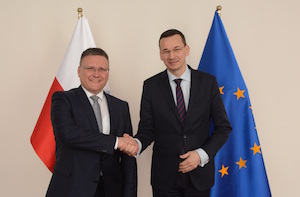 Poland – Parent company Daimler will invest around €500m ($570.4m) in the engine factory, the second such facility for Mercedes-Benz Cars outside Germany. The OEM says that the investment is dependent on final commitments including state aid, but that the start of production is anticipated for 2019.

“Capacity expansion in Eastern Europe reflects the increasingly international orientation of our powertrain production compound,” commented Markus Schäfer, board member for Mercedes-Benz Cars, Production and Supply Chain Management. “This will lead to more flexibility and efficiency in our worldwide production network.” The OEM says that the establishment of its Jawor plant will create “several hundred” jobs; future employees will be subject to “extensive” training.

In Romania, another Daimler subsidiary, Star Transmission, assembles transmissions as well as making components; in China, the BBAC joint venture in Beijing makes engines for the local market; and in the US, the Infiniti Decherd plant, Tennessee, makes four-cylinder petrol engines for Mercedes-Benz, as part of a strategic cooperation between Daimler and the Renault-Nissan Alliance.