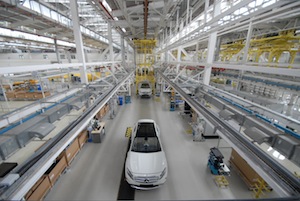 India – The compact car will join five other models in the plant’s production line-up: the S-, E- and C-Class sedans plus the GL- and M-Class SUVs. The factory was recently extended to produce 20,000 units per year and was also upgraded with new technology for the GLA, including extra assembly lines, synchronised conveyor systems and a roller tester.

“The start of production of the GLA in India marks the first time we are producing compact cars in our global assembly network along with sedans and SUVs,” said Markus Schäfer, member of the divisional board at Mercedes-Benz Cars, Production and Supply Chain Management. “We are thus entering the next stage with our market-specific assembly, allowing us to serve local demands in a flexible and efficient manner according to highest quality standards.”

The network already includes locations in Thailand, Vietnam, Malaysia and Indonesia, and next year will see the addition of a factory in Brazil which is currently under construction. These facilities make Mercedes-Benz cars for the local markets, using a range of production methods including completely knocked down kits and semi-knocked down kits.

Pune has received investment of €150m ($169m) since opening in 2009 and has been described as “a significant pillar of our growth in India” by Piyush Arora, the company’s executive director, Operations, within the country. Mercedes says that sales of its compact SUV in India tripled in Q1 2015.