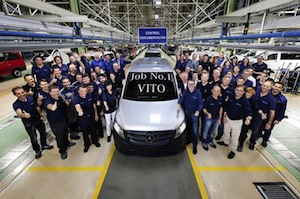 Spain – The first series production vehicle rolled off the line at the Vitoria plant after a €190m ($246m) investment to prepare for the model changeover of the OEM’s mid-size vans.

According to Frank Klein, head of Production, Mercedes-Benz Vans, the new Vito will be the OEM’s second global vehicle after the Sprinter. Emilio Titos, head of the Vitoria assembly plant, commented that the site “continues to be the competence centre for mid-size vans within our global production network”.