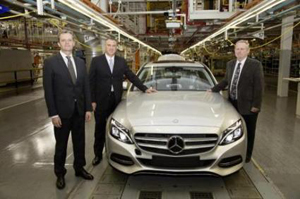 South Africa – The OEM’s East London plant has become the second manufacturing location for the model three months after the launch at Bremen, Germany.

Arno van der Merwe, CEO and vice-president Manufacturing, Mercedes-Benz South Africa, said the company has made “significant investments” for the qualification of personnel, referring to the 550 new recruits at East London. “This goes especially with regard to the host of innovative manufacturing technologies which have been introduced at the plant for the first time with the new C-Class,” he added.

The production launches at Bremen and East London will be followed by similar developments at Tuscaloosa, Alabama, and Beijing, China, making the C-Class sedan the first Mercedes-Benz model to be made on four continents.