Germany - The first new Actros has come off the production line at the Mercedes-Benz Wörth plant in southern Germany. It is the first facility in the OEM’s global network to start making the new model. 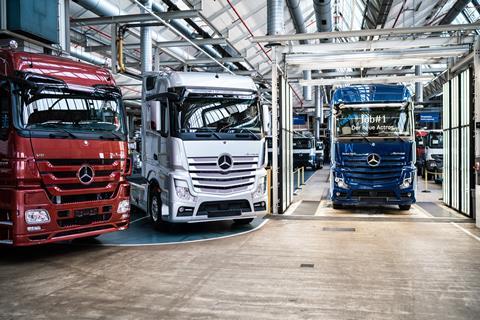 “This gives us at the Mercedes-Benz plant in Wörth a special role in the international production network,” commented Matthias Jurytko, head of the Wörth plant. “In more than half a century the Wörth team has built up outstanding know-how: They know exactly how trucks are produced to the highest quality standards. And they have once again demonstrated this impressively with the start of production of our new flagship.”

Preparation for the introduction of the new Actros began back in 2014, when assembly of the vehicle was simulated on the basis of digital models in a special virtual reality room. This allowed for the refinment of production processes long before actual production started. Furthermore, around 50 projects with suppliers were started in order to ensure smooth access to new systems and technologies contained in the vehicle.

An expansion to the cockpit pre-assembly area was also necessary for the new Actros, while adjustments to test benches were made to allow workers to individually calibrate every MirrorCam - cameras that replace the conventional external mirrors found on the previous model.

The plant in Wörth is the largest in the Mercedes-Benz Trucks network. It produces around 470 customised units a day and employs over 10,000 people